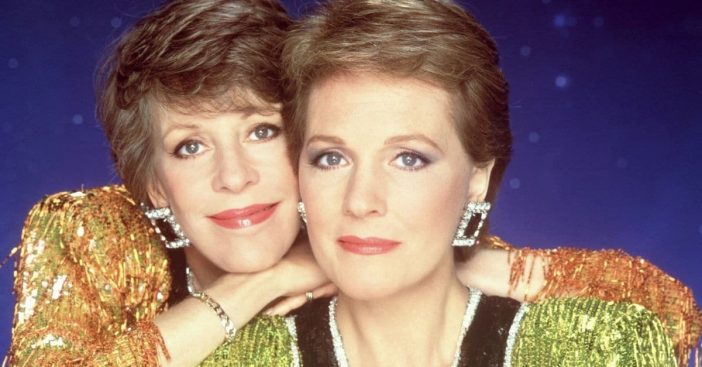 85-year-old Julie Andrews recalled the time she was caught by a former First Lady kissing Carol Burnett; yes, you read that right! Andrews opened up about the funny situation on Kelly Clarkson’s talk show recently while promoting her new book Home Work: A Memoir of My Hollywood Years.

“Carol and I were waiting for our friend Mike Nichols to arrive at a benefit that we were both doing,” Andrews says, noting it happened during the ’60s. The pair got bored waiting for their friend so they decided on meeting Nichols at the elevator and play a little prank to make him laugh.

The story of how Julie Andrews was caught kissing Carol Burnett

“It was Lyndon Johnson’s inaugural, so the hotel was pretty packed, but at that hour it was quite quiet,” Andrews says. “We decided to sit on a sofa in front of the elevators and wait for Mike.” Andrews says she doesn’t recall whose idea it was to “do something silly” but does recall one of them saying “Well, let’s be kissing or something.”

So, the two decided to embrace just as the elevator door opened, but instead of their friend, it was an elevator full of secret servicemen. “Eventually, a lady got out — Carol swears it was Lady Bird Johnson — the lady went down the hall, realized it might be us, and she came back,” Andrews remembers.

How their incredible friendship began

“By this time, Carol was laughing so hard that she went around the back of the sofa we were sitting on because we both had tears running down our faces at being so silly.” The mystery woman eventually came back around again and asked, “Excuse me, are you Carol Burnett?” to which Burnett responds, “Yes, and this is my friend Mary Poppins!”

Andrews still remembers and laughs about the moment to this day. “So it was a great moment it really was.” Burnett also remembers how she first became friends with Andrews. “A friend of hers knew me also. He was an agent, and he said, ‘You two guys have to meet each other. There’s something about the two of you,’” she recalled, noting the pair met for dinner with two other pals. “So the two men were sitting there, and Julie and I never shut up. We just kept talking. It was like we knew each other from the get-go.”

Click for next Article
Previous article: The Strange Way Our Favorite Ice Cream Bars Were Made Throughout The ’50s
Next Post: Breaking: Alex Trebek Dies At 80 After Being Diagnosed With Stage 4 Pancreatic Cancer