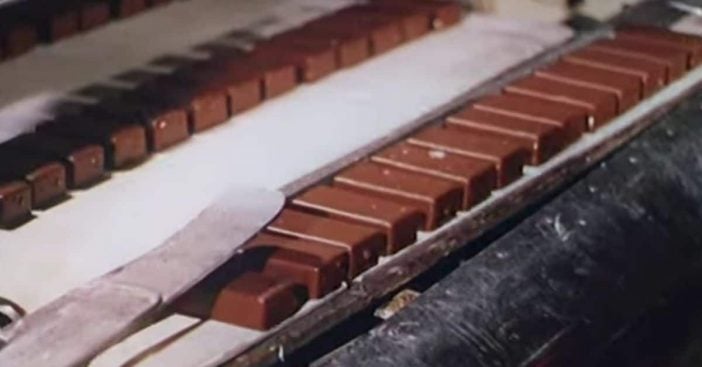 Ice cream bars got an early start and faithful following decades ago. They took on various forms with different flavors from all sorts of brands. But how do these refreshing sweets become the desserts we know, love, and eat with gusto?

Like many things in the 1900s, the process of ice cream bar production became (relatively) automated. This became possible thanks to developments in factories and their respective equipment. But even with limited human involvement, the process leaves no stone unturned. Watch and learn how this dessert comes to life below.

The birth of ice cream bars

The video takes viewers to a Kensington factory as it produces “hundreds and hundreds” of ice cream bars. In Britain, where the video takes place, they’re known sometimes as “choc ices.” But observing this procedure gives an idea of what goes on when making Klondikes, one of the first mass-produced chocolate bars that ascended to prominence starting in the 1920s.

RELATED: 5 Surprising Secrets About Ice Cream Trucks From The Drivers Themselves

The journey begins with a vat of swirling cream that becomes shaped into blocks of solid ice cream. They travel down a belt and into a shallow pool of chocolate. That coats the underside in pure chocolate while a continuous waterfall of the brown liquid flows on top of it. Fourteen bars line up beside each other and the automated process puts them into their own batches to head to the wrapping machine.

Ice cream bars have a surprisingly long history. Ice cream itself, composed of different ingredients, enjoyed popularity during the reign of Alexander the Great. Bars as we know it developed in the ’20s, originally with the now-dropped name Eskimo Pie. Desserts like this helped solve the debate between candy or ice cream and allowed confectioners to contain ice cream without fear of it melting thanks to the hardened chocolate shell.

The Klondike bar – often asking consumers what they would do for one – really catapulted the ice cream bar as we know it to fame. Based on the wrapper, a polar bear feels right at home among the cool, refreshing taste of this creamy, chocolatey staple. Though, Klondikes aim to stand out from ice cream bars and ice pops by boasting it does not have a stick, thanks to its size. That way, consumers don’t lose even a sliver of space that could go towards chocolate and ice cream. For an insightful look into the ice cream bar production process – and to see a mesmerizing twist on the treat- watch the video below.