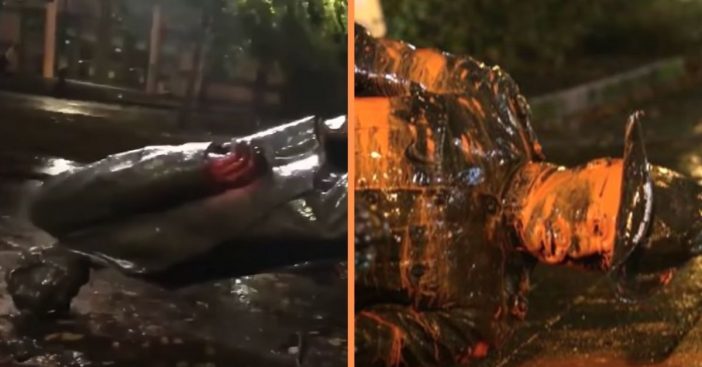 In the wake of racial injustice protests in Portland, Oregon, protestors have overturned the statues of former presidents Theodore Roosevelt and Abraham Lincoln. They also vandalized the Oregon Historical Society in a declaration of “rage” toward Columbus Day, which many people now call Indigenous People’s Day.

Protestors organized the event called “Indigenous Peoples Day of Rage,” which is in response to the federal holiday named after Christopher Columbus. Columbus is said to be a figure in America’s history who spawned centuries of genocide against indigenous peoples.

On Sunday night, protestors threw chains around the Roosevelt statue and splashed red paint all over it before using a blowtorch to the statue’s base. The statue was then pulled down by the crowd around 9 p.m. The group pulled down Lincoln’s statue about eight minutes later.

RELATED: Statues Of Christopher Columbus Are Being Vandalized Throughout The U.S.

According to Yahoo!, historians have once said that Roosevelt expressed hostility towards Native Americans, which would give protestors motive to tear down the statue. “I don’t go so far as to think that the only good Indians are dead Indians, but I believe nine out of every 10 are …” Roosevelt allegedly once said.

Protestors spray-painted “Dakota 38” on the Lincoln statue before taking it down. This is in reference to the 38 Dakota men that Lincoln approved to be hanged after they were involved in a violent situation with white settlers.

After bringing down the statues, protestors smashed the windows at the Oregon Historical Society and soon began moving onto the Portland State University Campus Public Safety office. A quilt that was sewn by 15 Black women from Portland in the 1970s was one of the many of the items damaged in the event.

Oregon Historical Society executive director Kerry Tymchuk has spoken out since the damage. “As we clean up broken glass, scrub paint, and make plans to ensure safety in our building, we also, as always, welcome critique of our work. We would be grateful to have constructive feedback from all those who are willing and able to aid OHS in fulfilling our vision of an Oregon story that is meaningful to all Oregonians.” In addition to the aforementioned damage, three people were arrested after multiple businesses were also damaged and vandalized.

Click for next Article
Previous article: Senator John McCain’s Mother Roberta Dies At Age 108
Next Post: Donny And Marie Osmond Might Be On Season 4 Of ‘The Masked Singer’