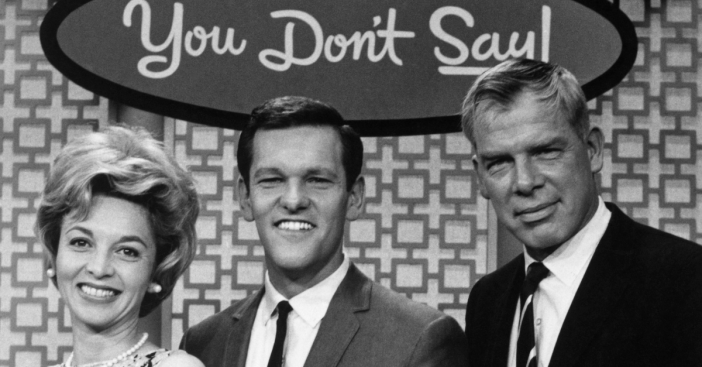 From the 1950s to the 1970s, daytime television was absolutely filled with game shows and hosts that the audience would follow from game to game. One of the more popular ones, Tom Kennedy — whose credits include You Don’t Say and Name That Tune — died on October 7 at the age of 93.

He was born February 26, 1927 in Louisville, Kentucky, and while attending the University of Missouri found work at local radio station WFRU, followed by WKLX. Deciding to try his chances in Los Angeles, he spent five years employed by KPOL and part-time at KGIL. Then he made the transition to television and early on served as host of The Big Game (1958) and Dr. I.Q. (1958 to 1959). Then came his most successful show, You Don’t Say!, which aired on NBC from 1963 to 1969, and returned for a single season in 1975 on ABC.

In his book Television Game Show Hosts: Biographies of 32 Stars, author David Baber details, “KTLA-TV launched the game show You Don’t Say! in late 1962 to test the waters for a possible major network run. Kennedy and veteran television host Jack Barry took turns hosting the show on a short-term basis. When NBC picked up the series in the spring of 1963, Kennedy became the host.”

RELATED: 11 Fantastic Old Game Shows We Wish Were Still on the Air Today

Of the game itself, he says, “The simple word game featured two celebrity contestant teams who guessed the names of famous people and places using a series of clues. One member of the team was given the mystery name and tried to get his or her partner to guess it. The clues were given in the form of incomplete sentences with the last word of the sentences being left blank, hence the show’s name: You Don’t Say!. The first team to correctly identify three names collected $100 and played a bonus game.”

He explains that the show was the highest-rated daytime game show in the 1967 to 1968 season, but it was nonetheless canceled in 1969. As Kennedy told the author, “NBC went into the dumper and it took them a long while to recover from that. It wasn’t the brightest move they’ve ever made.”

Kennedy found some work as an actor as well, on stage in a touring company of Neil Simon’s The Odd Couple and on TV shows like The Ghost & Mrs. Muir, Rowan & Martin’s Laugh-In, Cannon, Hardcastle and McCormick and Cybill. Retiring in 1989, he, again, passed away on October 7, 2020 at 93, the cause of death unknown.

Reflects David Baber, “He once mentioned how he and his wife Betty had come to California in the early 1950s with the understanding that if things did not work out, they would go back to Kentucky. Now 55 years later, Kennedy is a bonafide Californian. ‘We’re going to try for another 55 years,’ he said, ‘and if it doesn’t work, the hell with it. We’re going to go home.'”