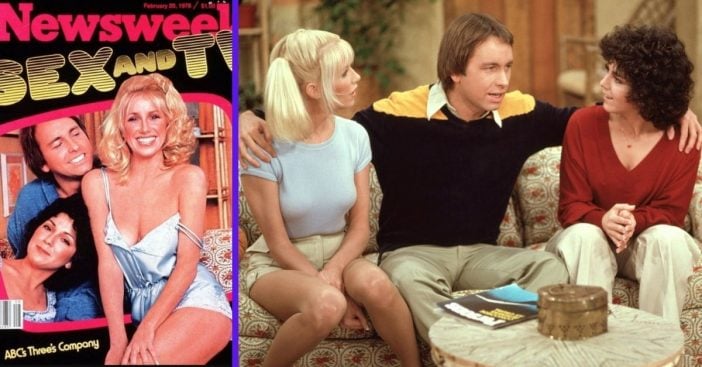 A picture may be worth a thousand words, but in the case of Three’s Company — the sitcom that ran on ABC from 1977 to 1984 — you might say that one led to pure silence. The show, starring John Ritter, Suzanne Somers and Joyce DeWitt as roommates, spawned a pair of short-lived spin-offs, The Ropers and Three’s a Crowd. A Top 10 hit for most of its run, it’s remained a fan favorite for all of these years. But things weren’t always so upbeat for the cast due to a specific magazine cover.

A Newsweek cover story caused some drama behind the scenes with the cast, as Chris Mann, author of 1998’s Come and Knock on Our Door: A Hers and Hers and His Guide to Three’s Company, reports.

A look at the magazine cover that caused all the drama

He says, “Joyce wanted to be known as an actor and not a celebrity, and a lot of that feeling grew out of a Newsweek cover story. Suzanne had her own photo shoot before or after the shoot of the trio, which John and Joyce were very uncomfortable with, having Suzanne being featured. She had other shots of her in front of the pink or blue screen in a nightie. Apparently one of those shots was super-imposed over the image that Newsweek had of the three of them, and that created a lot of tension behind the scenes. It also further conflicted Joyce about doing publicity, because she felt lied to.”

Following this, John pretty much refused to work with Suzanne — launching a feud wasn’t put to rest until just shortly before his 2003 death. Contract issues were ongoing behind the scenes, under the assistance of Suzanne’s husband, Alan Hamel, insisting that her pay increase from $30,000 per episode to $150,000.

From the cover spiraled additional issues and a life-long feud

“The contract issues were the beginning of the end,” says Chris. “Actually, he refused to work with her at the end of 1980. She then took her grievances to the press. Alan and she were revealing John’s salary and saying things on talk shows like if her name had been John Somers, this wouldn’t be happening, which only exacerbated the situation. There was, however, a moment when he had told Alan he would talk to Suzanne one-on-one, without him, without publicists, without managers or agents, and Suzanne did not take the invitation. So any chance for that to be salvaged in the spring of ’81 was pretty much completely torpedoed.

“The narrative about what happened has really been reduced to sound bites since John died,” he elaborates. “What happened was these negotiations started in summer of 1980 and they weren’t going anywhere. The meeting with Alan and [Three’s Company producer] Mickey Ross blew up, and then Suzanne came into work. And then she missed a show due to, she said, a rib injury. And then she came back, and then she missed another one. This was after a writers’ or actors’ strike in Hollywood at the time and the show was already in a bind, so she alienated a lot of other people on the show. And the way she handled the whole situation in the press was sort of the final nail in the coffin, I think. John seemed to navigate her whole, ‘I want to be the next Farrah Fawcett’ scenario pretty well.”

Ritter was pretty hurt from what happened

Chris continues, “He seemed to forgive the Newsweek situation, and he seemed to look past some other things that were happening, but when her attitude became — and I’m quoting him here — ‘F you; I am Three’s Company,’ that’s when he drew the line. You know, it’s a little bit reminiscent of what happened a couple of years ago with Roseanne. You have this number one hit, this huge hit, that came crashing down for different reasons, but for something totally avoidable, and causing a lot of pain.”

He also notes that negativity and outright anger was not a usual response for John. “There was a lot of love on that show, and he came onto that set every week, by all accounts, and just exuded love, made guest stars feel welcome, people feel important. He helped, I think, punch up some of the comedy bits for Joyce and Suzanne where they might have been lacking, and certainly afterward with the other women [that replaced Suzanne]. And I think he took it as a personal betrayal by her. He took it personally when she did what she did in Season 5.”