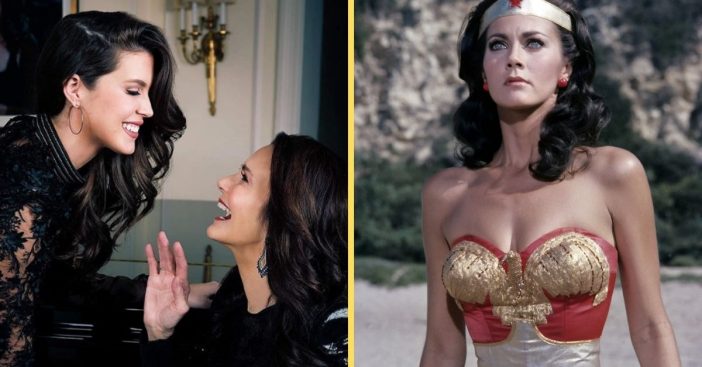 Since the character’s conception, Wonder Woman provided inspiration for countless fans. For women, she showed a strong warrior who could achieve anything and reach outstanding heights. For fans of any gender, she represented the endless pursuit of justice and goodness. Lynda Carter helped solidify Wonder Woman’s appearance. She and her daughter Jessica Carter Altman looked like sisters discussing Diana of Themyscira.

The two spoke together on an interview for Access Daily with Mario Lopez and Kit Hoover. They’re an iconic duo already thanks to their projects together. In the interview, Jessica explored the ways her mom lives up to and surpasses her heroic alter ego of Wonder Woman.

“She embodies the character every single day,” admitted Jessica Carter Altman about her mother Lynda. Carter became the face of Wonder Woman in the live-action television series of the same name. The show aired from 1975 to 1979. She carries a lot of weight that the songwriter sees each day when people honor their loved ones.

“‘I think every person believes and sees the character as a strong woman figure in their lives,” Jessica explained. “Their moms, their girlfriends, their grandmothers, their aunts, their sisters.” All could be Wonder Woman at the end of the day. But when it comes to wonderful women, Jessica feels she has the best of them all. “I just feel really lucky that my mom is even more wonderful than the character,” she admitted.

A lifetime of inspiration

Debuted in 1941, Wonder Woman turns 80 in 2021. In that time, she allowed Lynda Carter to be an inspiration as the character. But she also achieves this as a mom for Jessica Carter Altman. “She taught me how to be strong,” Jessica then explained in the interview. After that, she went on, “She taught me how to be brave and she taught me that I could do whatever it is that I want to do, and that I didn’t have to fit anyone else’s ideal.” The two share a strong bond, which is visible when they perform together.

As a result, “I just had to be myself.”  Her mother taught independence. After becoming such a key part in sharing Wonder Woman’s message, Carter has a unique understanding of the hero. According to the actress, Wonder Woman can be admired for her well-rounded nature. At the end of the day, she is “iconic for her heart and her intellect and her strength and beauty.” Ultimately, Lynda Carter displayed these traits to Jessica. Then, she passed them onto her daughter. Jessica developed a successful music career for herself, which saw her singing beside her mother.

Check out our Cast Then / Now for the wonderful Wonder Woman: