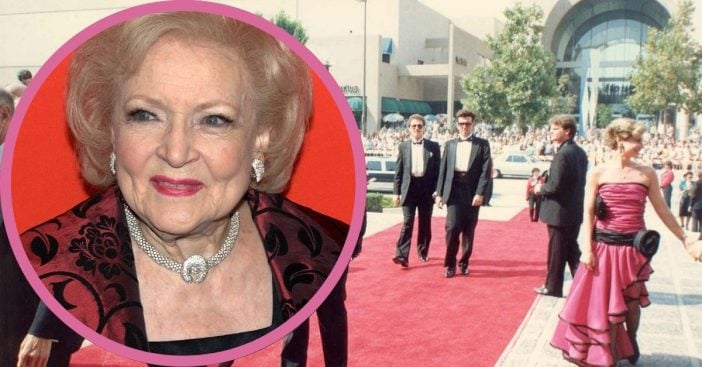 When someone has an acting career that spans eight decades, they tend to notice the triumphs and failures of the industry. As a result, Betty White has some things she likes and hates about the entertainment industry, though there is one element in particular that drives her crazy.

This something comes in part from the industry and in part from deep-rooted habits she developed in the early days. But some things can take time — even decades — to un-learn, and still require gentle reminders to adjust course.

White could do without the red carpet

Flashing lights, loud yelling. These things bombard White as soon as she steps out of her car and onto the red carpet. She admitted the walk is not as glamorous as people might think based on the reporting and dreams of stardom. Yet despite all of that, she, too, can fall under its spell at certain times. “Don’t get me wrong,” White clarified. “When I’m at home watching television, I love seeing who’s there and what they’re wearing. But when you’re the walkee, it can be an absolute nightmare.”

RELATED: Betty White Was Best Friends With This “Dynamite” Comedian

Each walk down the red carpet further trained White’s acting and improved abilities. “In real life, you step out of the car and immediately you’re struck blind and deaf as you’re greeted by a line of photographers armed with flash cameras and microphone-wielding television reporters, three deep, all shouting at you,” she recalled. As a result, “You can’t really hear what they’re saying, given all the noise, so you just keep talking and hope you’re making some kind of sense. It’s all seat-of-the-pants. You can’t resent it—it’s a necessary evil to promote a project. It’s a hazard one just has to get over. It’s not my favorite part of the job.” In fact, given the choice, White openly admitted, “I would rather go to the dentist for a root canal.”

The entertainment industry also made Betty White hate saying “no”

Today, networking can be easy for some, especially with the visibility the internet grants. Casting calls can include international hunts for videos. But decades ago, when White started, actors had to fight for a foothold. Studios even pulled the plug on a project for Paul Lynde. Ultimately, nothing was a guarantee. Today, Betty White is a beloved, sought after icon in the entertainment industry, but she still hates saying “no.”

“Sixty-three years in this business and I still find it difficult to refuse a job offer,” White wrote in her book, If You Ask Me. “That could be a hangover from the early days when jobs were hard to come by and I always thought each one might be my last. I do manage to utter the ‘NO’ word if the schedule is on overload or if the script doesn’t appeal to me—the latter being the real issue.”