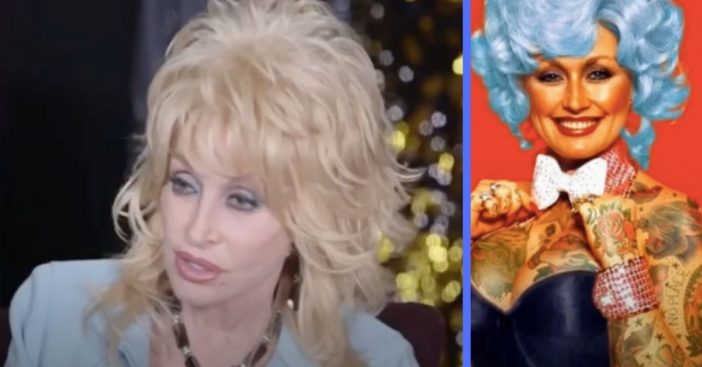 There have been rumors going around that Dolly Parton is secretly inked up with tons of tattoos. The 74-year-old has finally confirmed whether or not she secretly has tons of tattoos on her body. “I do have some tattoos, that’s true,” she tells PEOPLE. “But they’re tasteful. I’m not a tattoo girl.”

She has officially shot down any rumors speculating that she has fully inked up arms. Not true! It was actually a medical issue that first led her to get some tattoos. “My tattoos are pretty, they’re artful and they usually started out to cover some scar, not to make a big statement,” she says. “Ribbons and bows and butterflies are the things that I have. I was very sick for a while and I had to wear a feeding tube. It left a little indention in my side and I didn’t like it because I’m so fair that scars turn purple on me.”

Dolly Parton is NOT hiding tons of tattoos

She continues, “I like to make positives out of negatives. I had a little beehive tattooed over it — a little yellow-and-brown beehive with a tiny little bee on top of the hive. The mouth of it is that little sinkhole.”

Parton has also confirmed she does not have a tattoo of her husband, Carl Dean. “No, he’s tattooed on my heart,” she says with a laugh. “Who knows, I may get some more later. I may just have to get covered with tattoos just so everybody could be right!”

She does have a few tasteful tattoos

These tattoo rumors have been around for a pretty long time, almost as long as the tattoo themselves! “People said the other day that the reason you wear sleeves is because you have snakes tattooed all over. I said, ‘No, I don’t!'” she says to Savannah Guthrie back in 2014. “I do have a few little tattoos, but they were mostly done to cover scars ‘cause I’m so fair.” Parton adds that she has tattoos where they aren’t visible to the naked eye.
Parton also reveals how she deals with circulating rumors, saying that she just laughs it all off. “Oh, yeah! I always laugh at them. One, it shows up about every three years in the tabloids, where I’m bedridden because my boobs are so heavy that I’m crippled for life on my back. I just laugh. Well, they are heavy, but they haven’t crippled me yet.”
Click for next Article
Previous article: A Magazine Article In the ’80s Predicted Computers, DVRs, And More
Next Post: Lucie Arnaz Says Her Mother Wasn’t As Silly As Her On-Screen Persona