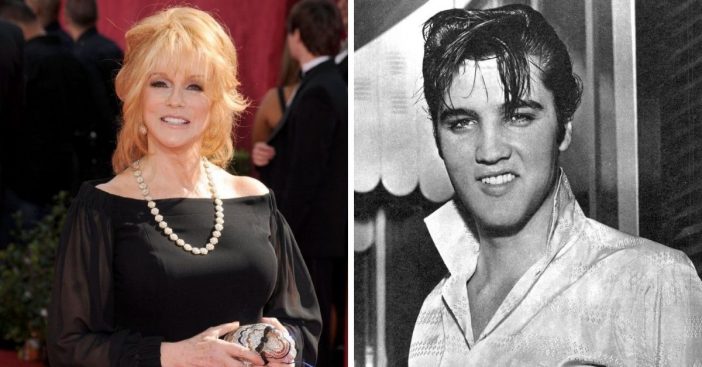 We all know and love the King of Rock and Roll –  Elvis Presley, unfortunately, died too soon of a heart attack in 1977. He led an awe-inspiring life and his influence on the music industry continues today. However, like anyone Elvis had his own flaws and demons. During his engagement to his future wife, Priscilla Presley, Elvis engaged in a famous love affair with actress Ann-Margret Olsson.

Although the relationship eventually ended and Elvis went on to marry Priscilla, the affair is often seen as a black spot on Elvis’ record. But you won’t find Ann-Margret spewing negative things about her time with him. Ann-Margret has given the basic details about their affair, but she refuses to disrespect Elvis’ memory with tawdry gossip.

Ann-Margret and Elvis’ affair began on the set of Viva Las Vegas. She was his leading lady in the film. In her autobiography, Ann-Margret reflected on their fateful introduction. Studio-photographer George Sidney brought the two together saying, “‘Elvis Presley, I’d like you to meet a wonderful young lady, Ann-Margret. Ann-Margret, this is Elvis Presley.’”

The pair eventually became inseparable as the filming for Viva Las Vegas continued. A passionate love affair began, but both parties seemed to know that it couldn’t last. Ann-Margret recalled, “We continued to see each other periodically until we had dated for almost a year. Then everything halted.” Priscilla’s book Elvis and Me indicates that Elvis eventually confessed everything and returned to her. The pair finally married in 1967.

Ann-Margaret Won’t Be Giving Too Many Details

Elvis’ untimely death at only 42 years old devastated the world. During his funeral, along with friends, family, and other loved ones, Ann-Margret was there. She was one of the few actors from his on-screen days to show up. Despite their relationship being short-lived, the two had an undeniable connection. In an interview with Charlie Rose, Ann-Margret stated, “Our relationship was very strong, and very serious and very real.”

But Ann-Margret won’t be giving too many more details. She stated, “We were together for one year and he trusted me. And I would not want to betray his trust in death.” Ann-Margret doesn’t want to contribute to any bad thoughts about Elvis. “There’s been so much written that has been negative about him that I want to celebrate his life [and] the man that I knew.” Ann-Margret continues to show maturity in sticking to her guns and remembering the good times with Elvis.