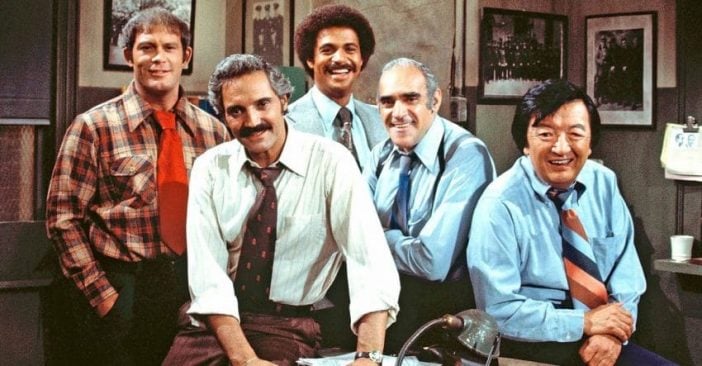 The 1970s were a time for some great sitcoms, ranging from The Mary Tyler Moore Show and The Bob Newhart Show to pretty much everything Norman Lear produced (All in the Family, Sanford and Son, The Jeffersons, Maude …. the list goes on). And one comedy that came out of that era that remains beloved — if not talked about as much as those others — is Barney Miller, with Hal Linden leading an amazing cast of performers.

The show is set at Greenwich Village, New York’s 12th Precinct and features an ensemble of cops and the ever-changing perps those cops would arrest. Joining Linden was Max Gail as Wojciehowicz, Jack Soo as Yemana, Gregory Sierra as Chano, Linda Lavin as Wentworth (Season 1 and 2 only; the actress moved over to CBS so she could star in Alice), Ron Glass as Harris, Steve Landesberg as Dietrich, Ron Carey as Levitt and Abe Vigoda as Fish. Having recently looked at all of them in Do You Remember’s “Barney Miller Cast: Then And Now,” the attention is being turned to Linden, who, in an exclusive interview, shares some of his memories of the show and the things that made it unique.

‘Barney Miller’ Was Not Filmed In Front Of A Studio Audience

Unlike a lot of sitcoms from the era, Barney Miller found it better to shoot the show without a studio audience, whereas many other shows preferred the energy provided by the crowd. The decision was made by Danny Arnold who would frequently start filming without a complete script and in one instance actually had to turn the studio audience away.

For Linden, this went against one of the reasons he signed up for the show in the first place, believing that, being a stage actor, he would have a greater comfort level with an audience. “Well,” he laughs, “I was very quickly dissuaded from that version, because the cameraman would say, ‘Hey, over here. Not them. Over here. This is where you audience is.’ And until you, l learn that you are way too big for the little screen. Rather than the overt playing of comedy, Barney Miller demanded subtlety.”

His Actual Reason For Joining The Show? ‘Why Not’

In the early 1970s, Linden was having great success on Broadway — including winning a Best Actor Tony for 1971’s The Rothschilds — and when the offer for the pilot to Barney Miller came to him, he literally waited as long as he possibly could before saying to his Manager, “Well, we’ve done Broadway. Let’s try television.”

The Show Was Nearly Canceled After Its First Season

The ratings were pretty rough the first season, and Barney Miller was the very definition of a “bubble” show; the decision to renew possibly going either way. It’s his firm belief that the approach was much more subtle than a lot of other shows were the comedy more or less having to come in from people entering the 12th Precinct rather than the ensemble being joke machines.

“Everything else was more straight-line/punchlines; more sketchy than realistic. What was expected was something like Happy Days,” he offers. “Danny envisioned it differently and he put the limitations on our doing shtick.”

That was based on a very simple question: as a citizen, would you be willing to turn to a cop for help who behaved in anything but a realistic way. “There was a lid on everything,” Linden says. “You could never go too far just to get a laugh. You had to be a real police officer that could do his job. It’s a lesson that stuck with me for the rest of my television career in terms of what works, how far you can go or how far not to go.”

Like Andy Taylor Before Him, Barney Needed To Be The Straight Man

One of the discoveries in the first season of The Andy Griffith Show was that the show was much stronger when Andy Taylor was the sane one in Mayberry surrounded by all of these eccentric personalities. A similar approach was taken with the character of Barney Miller.

Reflects Linden, “That crept into my sensibility slowly episode to episode over the years. The quintessential episode of Barney Miller is probably the one with the hash brownies, where everybody gets stoned. I turned to Danny and said, ‘Everybody gets to do an aria but me,’ because I was the only who didn’t eat them. And he said, in what became yet another lesson in life, ‘I have to have somebody up there to compare the others to.’ From there on I said, ‘I’m gonna be the straight man.’ I came to terms with it very early on. Jack Benny had a terrific career as a straight man, basically, so I had no problem with it.”

Danny Arnold More Or Less Decided That The Show Was Over, Not ABC

The series had an eight-season run and it seemed like it would go even further — until series creator Danny Arnold met with the cast and made the announcement that things had reached a point where every script being written felt like a rehash of things they’d done before and if the show couldn’t maintain its level of quality, he didn’t want to go on with it.

“Everybody was writing the monologues that Dietrich did, or the coffee jokes,” explains Linden. “They were just rewrites of the same material, basically. And Danny said, ‘We’ve had a good run. You guys should go on to something else.’ So he retired the show at the ne of that year; it wasn’t canceled. I suspect that we probably could have gone on as long as M*A*S*H.”

As much as he loved the show, Linden was fine with it coming to a close, trying to decide whether he wanted to go back to Broadway, make movies or find a new TV show (ultimately he bounced back and forth between all three). Linden expresses that he has nothing but fond memories of Barney Miller.

“It was the best television experience I ever had, and I mean that from a creative standpoint because it was like being in a stage company,” he reflects. “Like a repertory company that would work together; we knew each other and we were able to contribute to each other. I have never had as creative an experience in television since.  There was no other set like that one. Again, like in a repertory company, everybody respected everybody, and everybody’s input was there, and yet we never ad-libbed. We never came in with funny lines of our own. It was only executing the script as Danny would send it to us.”

The Magic Is Still There

At the age of 89, he continues to push on and has even put on a stage act where he sings and takes the time to look back at his career — a presentation that includes a montage of Barney Miller clips. And putting it together provided yet another life lesson as he watched episode after episode, season after season for research purposes.

“I was amazed,” Linden laughs. “It would be, like, 3:00 in the morning and I’d be saying, ‘Okay, one more. Just one more.’ One thing I can tell you is that I have no memory of ever walking away from shooting an episode of Barney Miller and anybody saying, ‘We’ll do better next week.’”