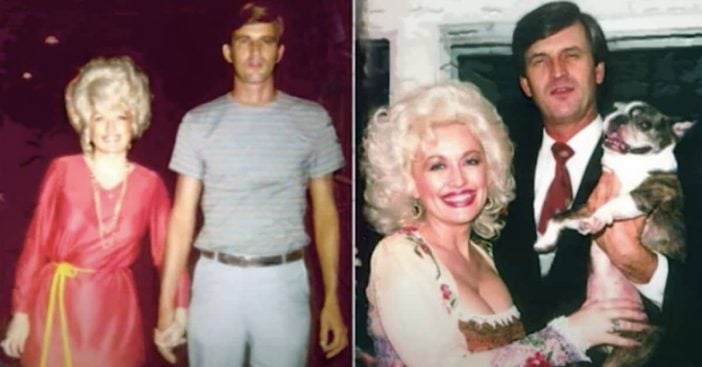 Would you believe that Dolly Parton and her husband Carl Dean have never fought? Dolly Parton has been married to her husband, Carl Dean, for 54 years. They have a more unconventional way of handling their marriage, but Dolly says herself that it has certainly paid off. She says that a little distance from one another is key. “I’ve always made jokes that the reason our marriage has lasted so long is because I stay gone,” she says.

“Well, there’s a lot of truth in that. We’re not in each other’s face all the time. I think there’s a lot to be said about having some sensible separation because you can’t be with somebody 24/7, 365 and not want to smack their face now and then.”

Dolly Parton and Carl Dean have never fought. How?

She even reveals that in all their years together, they have never fought once. “We’ve never bickered back and forth because I never wanted us to say bad things that we would have to remember. We get a little pissy now and then, but we’ll just kind of walk off or go do something else and let that die down. You have to work at anything. Marriage is a business too, and you got to look at it like that. You got to make the right decisions for all the little things that come up.”

Dolly says another reason for their long-lasting, happy marriage is “a great friendship.” She adds, “We’re both funny, and we both have a great and warped sense of humor so we’ve always had a good time. He’s pretty much a loner and a homebody, and I’m a gypsy. But when I’m home, I love that. We don’t do the same thing so it gives us different stuff to talk about. He doesn’t get involved in my business, and I don’t in his, so we have our own little world that we create for ourselves.”

The first year of marriage is so important

Dolly also talks about the first year of marriage and how vital it is to your relationship with that person. “That’s the year that you get the most rubbed wrong only because you’re having to share space with somebody you’ve never had to share your space with before,” she explains. “Your habits are different than theirs so you got to work those little things out.”

“It’s best just to go to the other room rather than getting in a big old argument about it, cool off and know they’re just as entitled to their opinion and their space as you are yours. So if you can think of it like that, and just know that when you both feel like you can calm down and talk about it, that’s where the love is supposed to come in and the understanding… Then if you get that worked out, smack him across the head.”

Dolly has often said that Carl stays out of the limelight and lets Dolly do her thing, just as Dolly does for him. It has helped create a very strong relationship, although some may not agree with distance. This has proven to work very well in her favor!

Click for next Article
Previous article: Sylvester Stallone’s Daughters Share The Weird Workout Advice He Gives Them
Next Post: Here’s Why Slot Car Racing Is Still Going Strong With Old And New Generations