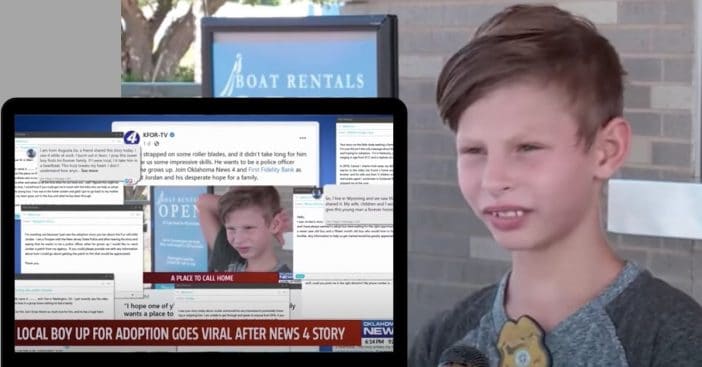 Jordan, who is a 9-year-old boy from Oklahoma, just wanted a family to call his own. “I hope one of y’all pick me,” he says in a recent video that went viral across the Internet. After the video went viral, he captured the hearts of so many to the point where he ended up with 5,000 adoption inquiries.

Oklahoma’s Department of Human Services has been overwhelmed with the outpouring of love for Jordan. He’s been in foster care for six years and the DHS is anxious to give him his final forever home. The 5,000 inquiries came within just 12 hours after the video went live.

Jordan gets 5,000 adoption inquiries for his forever home and family

Jordan’s story was actually part of a local NBC affiliate’s series highlighting kids waiting to be adopted. According to TODAY, the DHS has had problems placing kids in forever homes due to physical or behavioral needs. Jordan also has a younger brother, who was separately adopted. “Jordan has had struggles while in foster care. Now he’s older. He’s adorable. He really wants a family. He sees his brother has found that,” says Casey White, communications administrator at Oklahoma’s DHS.

RELATED: Pizza Shop Is Placing Photos Of Dogs Up For Adoption On Its Pizza Boxes

In the initial news coverage, Jordan is asked what he would want more than anything in the world. He says, “an adoption party for a home.” He was then asked what three wishes he would want granted. Jordan responds, “Family, family and family … I would just like to have a family to call mom and dad or just mom or just dad. I don’t really care.”

He continues, “I could have some people to talk to anytime I need to… I hope one of y’all pick me.” Check out the full news coverage below and find out how to inquire about Jordan. Let’s make sure this sweet boy gets a forever home!

Click for next Article
Previous article: 9/11 Memorial Light Tribute Back On After Initially Being Canceled
Next Post: ‘The Golden Girls’ Home Sold For Way Above Its Asking Price