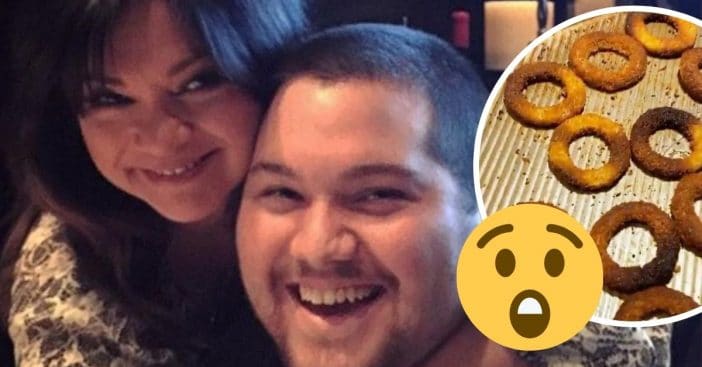 While Valerie Bertinelli has hosted many cooking and baking shows during her career, she is bound to make a mistake now and again. However, her son won’t let her get away with it without teasing her. Valerie’s son Wolfgang Van Halen was home while she was making some food.

He shared a video teasing her for burning onion rings. He captioned the video, “Ladies and Gentleman, my mother. You know, the one who won two (TWO!!) Emmys for her own cooking show. @Wolfiesmom #valerieshomecooking #overdonionrings”

Valerie gets “burned” by her son Wolfie

Ladies and Gentleman, my mother. You know, the one who won two (TWO!!) Emmys for her own cooking show. @Wolfiesmom #valerieshomecooking #overdonionrings pic.twitter.com/kZRtTYS17t

In the video, you can hear “Wolfie” joke and say, “Onion rings? More like overdone-ion rings!” Valerie took in all in good fun but had to make a few jabs back. She teased, “Tweet reported for abusive behavior.” She also shared a meme that said she would “block and report” her son, to which he quipped, “Blocked? Don’t you mean… burnt?”

RELATED: Valerie Bertinelli Gets Choked Up Talking About Her Son On Her 60th Birthday

Even though the mother and son duo feuded on Twitter, they had a great reunion about a month ago. They were both quarantined in other places and were finally able to reunite in July. Valerie said, “Oh, when he gave me a hug, it lasted a long time. I wouldn’t let him get out of the hug. It was just so nice — so nice to hug my son again.”

They are so funny together!