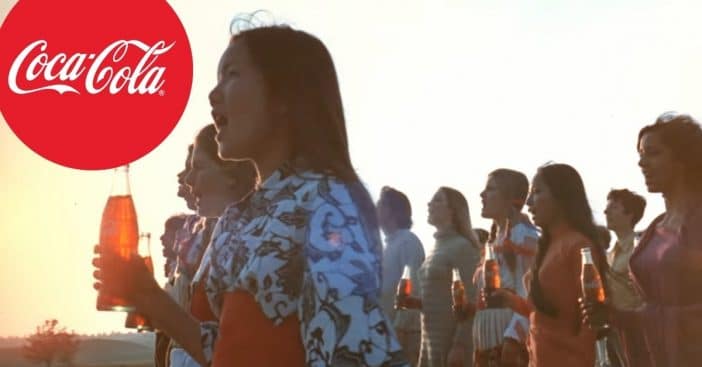 Commercials first and foremost want to sell their products. They utilize all sorts of persuasive techniques to do so: compile facts, present the company as worthy, and touch upon emotions. While all good commercials draw from psychology, some draw from real experiences. Coca-Cola’s “Hilltop” commercial from 1971 did just that.

People watching Mad Men flocked to the commercial on YouTube because of its presence at the end of the series. But decades before, audiences saw an ad that drew from a personal place. All of it could not have existed, however, if one day in the UK went smoothly instead of all wrong.

McCann Erickson advertising agency creative director Bill Backer needed to reach London. The date was January 18, 1971. As part of McCann Erickson, he was responsible for their account with Coca-Cola. In London, he’d set up a meeting with the account’s music director Billy Davis. The UK’s famous fog made good on all the tales it inspired and rolled in, forcing his flight to land in Shannon, Ireland. Initial reactions included frustration. But those same angry fliers, the next day, congregated at the airport cafe. Instead of annoyed glares, they wore smiles. In place of complaints, they voiced laughter and friendly chatter. And many of them bore bottles of Coca-Cola they were chatting over.

“In that moment [I] saw a bottle of Coke in a whole new light,” Backer reflected. “[I] began to see a bottle of Coca-Cola as more than a drink that refreshed a hundred million people a day in almost every corner of the globe. So [I] began to see the familiar words, ‘Let’s have a Coke,’ as more than an invitation to pause for refreshment. They were actually a subtle way of saying, ‘Let’s keep each other company for a little while.’ And [I] knew they were being said all over the world as [I] sat there in Ireland. So that was the basic idea: to see Coke not as it was originally designed to be — a liquid refresher — but as a tiny bit of commonality between all peoples, a universally liked formula that would help to keep them company for a few minutes.”

Because Backer faced a delay joining with his team London, Billy Davis and Roger Greenway fine-tuned some melodies and lyrics for a future ad. Originally, they arranged a tune around “Mom, True Love, and Apple Pie,” but after Backer arrived and explained his revelation, they changed it to “I’d Like to Buy the World a Coke.” It took some persuasion and workshopping, since Davis suggested everyone should be given a roof over their heads and peace in their lifetime instead of Coca-Cola. They met in the middle to make Backer’s revelation fit Davis’s point.

The team finally got to give everyone in the world a Coke in July 1971 after bad weather struck again. Instead of inspiring more ads, heavy rain delayed shooting this international endeavor. The team recruited all sorts of students from places around Rome. Their meticulous drive for perfection paid off when DJs told Davis, “I’m getting requests to play your commercial like it was a hit record.” To this day, sheet music for the song still sells. The whole sentiment resonates across decades and clips of people standing in peaceful unity can be something all the world aspires to someday. Thank goodness foggy conditions gave us this timeless piece of media and advertising.