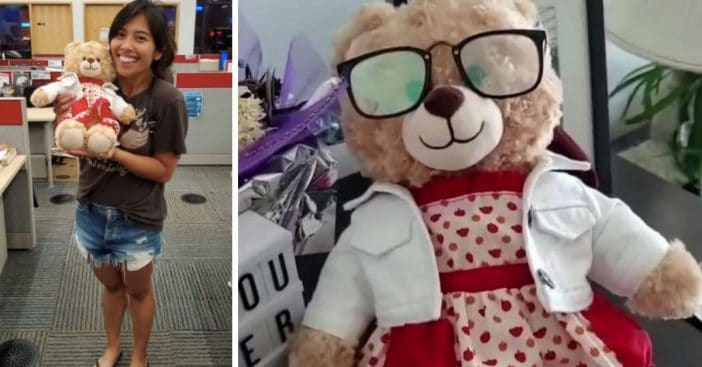 A teddy bear with a dying mother’s voice in the voice box has finally been returned to its rightful owner after being stolen. Mara Soriano’s mother, Marilyn Soriano, died back in June 2019 after a battle with cancer.

However, Mara and her fiancé rented a U-Haul to transport their belongings during a hectic move recently and the bear was packed in a bag with other belongings of theirs. Come to find out the bear had gone missing. The search for Mara’s bear became a top priority for not only them but some other celebrities as well.

The story caught the attention of actor Ryan Reynolds after CNN reported the story. Reynolds offered a $5,000 reward for whoever returned the bear to Mara. Other celebrities pitched in on the search as well, including Dan Levy and Zach Braff. Canadian TV and radio personality George Stroumboulopoulos and Kraft Peanut Butter also pitched in $5,000 each, making the reward now $15,000 for whoever found the bear and returned it.

RELATED: 9/11 Widow Increases Reward For Stolen Wedding Rings: “These Were My Remains”

Mara sent out a message that everyone had been waiting for; the bear was finally returned! She says two ‘Good Samaritans’ returned the bear “without a scratch on her.” The voice box was also perfectly working. The only thing missing was its glasses, a replica of her mother’s.

“It was like trying to find a needle in a haystack”

“It means just everything to me honestly,” Mara says. “There was a part of me that thought I’d never see it again, for sure. It’s a big city, there were so many places she could have been, it was like trying to find a needle in a haystack.”

Mara adds, “Now that I’ve got her (the bear), I just feel a little bit more hopeful and a little bit more bright. Every time I look at that bear now it’s just a reminder that my mom really is with me always, that she’ll always come back to me.”

In happier news… thank you everyone who searched high and low. To the person who took the bear, thanks for keeping it safe. Vancouver is awesome. #FoundMarasBear https://t.co/X7FlyiR89P

Reynolds also expressed how happy he was that the bear had finally come home. “In happier news… thank you everyone who searched high and low. To the person who took the bear, thanks for keeping it safe. Vancouver is awesome. #FoundMarasBear” he says in a tweet.

Security footage did show a video of a man taking the bag packed with her belongings, including the bear. The two men who returned the bear said that they found it at a park nearby.

Click for next Article
Previous article: Rude Wedding Invitation Is Causing Outrage Across The Internet
Next Post: ‘Everybody Loves Raymond’ Star Brad Garrett Gets Candid About Ellen Degeneres’ Toxic Behavior