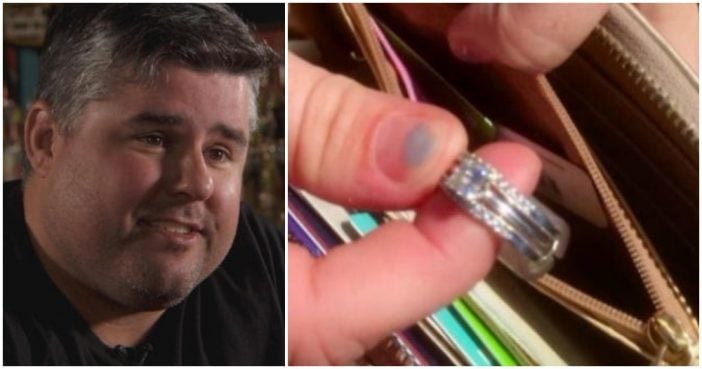 If you ever happen to own a $10,000 ring, make sure to keep it on your finger. But if you have to stick it in your wallet, don’t leave the wallet on a bench outside of a bar. This story is actually about one person that will make you lose your faith in humanity and another person that will totally restore that faith.

Jimmy Gilleece, who is from North Carolina, got a message from a woman in New Mexico. She told him about a ring that she had lost, that was very important to her, and it was an expensive ring too. She had visited Gilleece’s bar called Jimmy’s at Red Dogs, and that’s where she believed the ring went missing. That’s when Jimmy sprang into action to help find it.

Jimmy Gilleece has a happy life, a family, and is an all-around nice guy.

Gilleece also happens to be a hero, at least, that’s what one woman would end up calling him after he did the impossible and helped her figure out what had happened to her missing ring and wallet.

He owns the bar Jimmy’s at Red Dogs, which is usually packed.

And why wouldn’t it be? Not only can you order alcohol, but you can also listen to some awesome music. Gilleece often has bands playing at the bar. This attracts a decent crowd which keeps the place running.

The bar is the perfect spot for locals and passersby to stop by and unwind with a beer or two.

If you happen to find yourself sitting at Jimmy’s, you might get the chance to pet the bar’s dog. His name is Kruzer, and he’s one cool dude. Just look at how awesome he looks chilling on the counter! He’s obviously not shy!

Gilleece loves to ensure that his customers are happy and have a great time when they’re at his bar.

Unfortunately, a few weeks earlier, Gilleece got a message from a person from New Mexico. She told him that she had lost her wallet while at his bar, and to make things worse, the wallet had a ring worth $10,000 in it.

Gilleece thought for a moment and came up with a possible solution that would help the woman.

He decided to look through the footage from the security cameras and that’s when he noticed that the New Mexico woman had left the wallet on a bench. Then a young man had taken the wallet and fled the scene.

While the woman reported the theft to the police department, Gilleece had already figured out a way to help.

He believed that posting the image of the crook on social media might allow locals to help the police figure out who the thief was. Now this was a long shot because the man was wearing a hoodie, but Gilleece’s efforts paid off.

Locals eventually identified the thief, who wasn’t really an adult, at least, not at the moment.

His name was Rivers Prather and he was just 17 years old. The teen had already taken a wrong turn in life. But don’t judge the thief too harshly. Once you hear the story behind Prather’s motives you’ll see things a little different.

It turns out that Prather isn’t just a thief, but he’s also homeless, hence why he did what he did.

Praher had a falling out with his mother, and had been sleeping on the streets ever since. The teen was hungry, but he didn’t have any money to buy himself food or even a drink. So when he found the wallet, he grabbed the cash, and then he threw the wallet away into the ocean, where it was presumably lost for good.