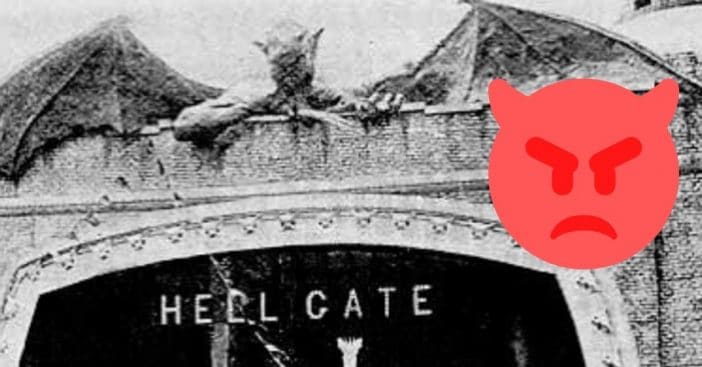 The famed Coney Island unveiled one of its most unusual rides in 1905. The ride was called Hell Gate and both terrified and delighted park guests. To enter the ride, you had to pay 10 cents and walk into a building guarded by a huge Devil. You would go into a boat and go forward… for those waiting it looked like the boat was swallowed up by the gates of Hell.

Nearby, visitors could also ride Creation, a biblical theme ride. While it seems a bit odd to have religious attractions at a theme park, there was a specific reason for this back in the early 1900s. According to New York history buffs Alex Delare and Jonathan Anderson, “Amusement parks like Dreamland made these religious rides, ones that portray the Judeo-Christian values because New York City would have shut the show down otherwise.”

They continued, “In the early 20th century, New York City had very strict laws that only shows of a religious or educational nature could take place on a Sunday. Because Sunday was the only day that people had off, it was the busiest day of the week down in Coney Island. If the owners of the park wanted to turn a profit, they had to have attractions that the city would allow, hence all the shows of a religious nature.”

So, how did Hell Gate actually work? The pool that the boat carries passengers was made with wood and iron into a spiral trough. Then the slope dips so people watching think that the boat disappeared! The next year, the attraction got upgrades including new boats, new effects, and the ride was even longer.

Accounts from that time period say that riders saw Satan and demons grabbing fake people in the tunnels. At the end of the ride, there was a monotonous speech about good behavior. Then, an angel appears and sends Satan down with the other sinners.

Oddly enough, the ride caught fire in 1911. Some tar that was used in the ride caught on fire and was never able to be put out. Most of the park caught fire and bystanders were shocked at a national treasure going down in flames. There were no human casualties, but many of the attractions were gone, never to return again.