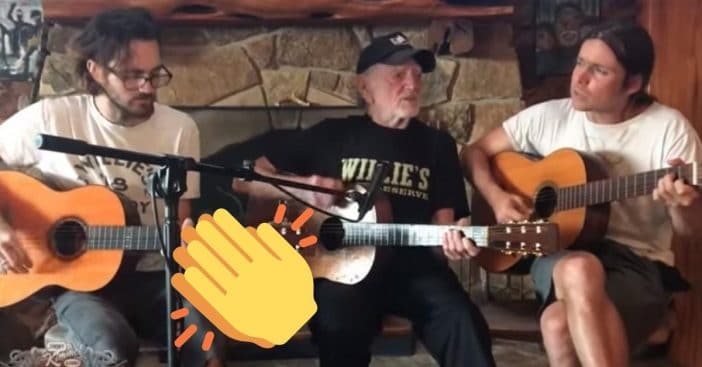 Willie Nelson and his sons Micah and Lukas recently appeared on Jimmy Kimmel Live! They performed “I Never Cared For You,” virtually. Despite recently turning 87 years old, Willie is showing no signs of slowing down. He has been performing a lot with his sons in quarantine, recently released a new album, and is releasing a memoir with his sister.

This month, Willie released a new studio album called First Rose of Spring. However, he has made sure to take care of his fans by doing plenty of live stream performances, many including his two sons.

In September, Willie and his sister Bobbie Nelson will release a joint memoir. The book is called Me and Sister Bobbie: True Tales of the Family Band. If you’re interested, you can pre-order it here. The book will be released on September 15, 2020.

While Willie and his sons appeared on Jimmy Kimmel Live!, Willie spoke to guest host George Lopez. George asked him about his recent thoughts about cannabis and how it has been legalized in many states. Willie is notoriously pro-marijuana.

He said, “I always knew people would realize [cannabis’] benefits and I think now that it’s legal in 30 states, medicinally, and recreationally legal in a lot of states, it’s on the way, and I think that’s a good thing.”

In conclusion, watch Willie and his sons perform “I Never Cared For You” below:

Click for next Article
Previous article: Mel Gibson Was Hospitalized After Testing Positive For COVID-19
Next Post: Who Shot J.R. In ‘Dallas’ Remains The Cliffhanger Of All Cliffhangers