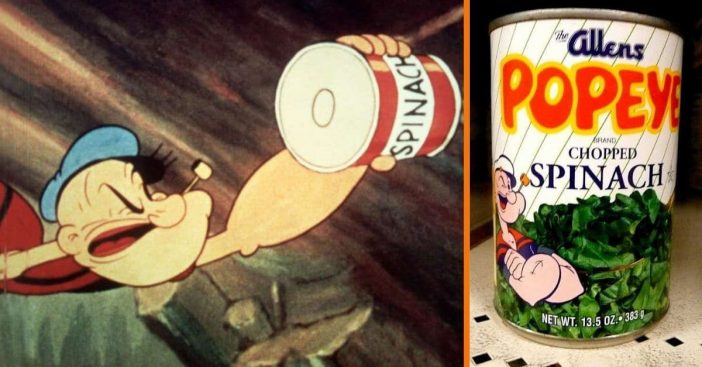 Popeye the Sailor Man was a fictional cartoon character by Elzie Crisler Segar. The lovable sailor first appeared in comic strip Thimble Theatre in 1929. Popeye later became the strip’s title some years later. By 1933, the comic strip character was soon adapted into an animated cartoon for Paramount Pictures. These cartoon shorts were extremely popular in the 1930s and thus, Popeye the Sailor was born.

Popeye has gone onto be featured in many different things such as comic books, television cartoons, video games, and hundreds of advertisements. He’s also a feature on products such as spinach and candy cigarettes. Spinach was always the prime food that Popeye ate to grow big and strong muscles. Many viewers can remember the line, “I’m strong to the finish ’cause I eats me spinach!”

The power behind the spinach

Tom Brindley of The Alpena News wraps it up quite nicely on the concept of promoting the power of spinach. “The exceptionality of spinach dates to 1870 when German scientist, Eric von Wolf, misplaced a decimal point reporting the amount of iron in a 100-gram serving as 35 milligrams versus 3.5. The impression became part of the character of Popeye, developed by Elzie Crisler Segar in the 1920s. Interestingly, a study by Freie University in Berlin concluded that an extract of spinach, ecdysterone, elevated athletic performance. Regardless of spinach, the animator develops Popeye’s character.”

Wouldn’t it be great if you could just gobble up some of that and immediately have the strength of a hundred bodybuilders! As a result of promoting the power of spinach, Popeye singlehandedly helped increase spinach sales, according to Wikipedia. He became a role model for inspiring healthier eating, as a study revealed that children increased their vegetable consumption after watching Popeye cartoons.

Sing along to the familiar tune!

Do you remember the lyrics to the infamous song?

Click for next Article
Previous article: Do You Remember Indulging In The Flavorful Pimento Loaf?
Next Post: People Share Where They Were The Day They Found Out Elvis Died