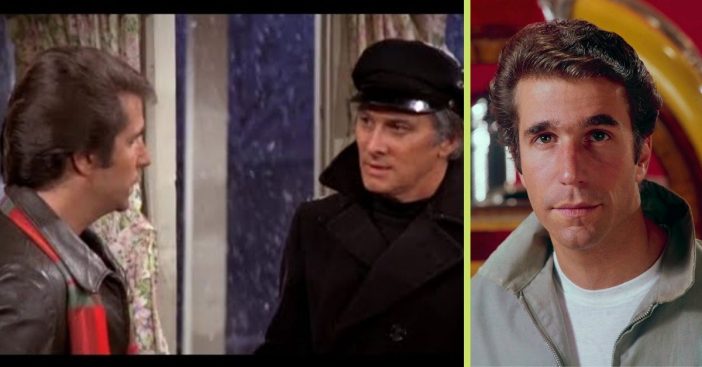 The Fonz from Happy Days, played by the incredible Henry Winkler, could teach us all a lesson or two about how to let go of hard situations. Viewers and fans of the show may remember that Fonzie grew up without knowing his dad. This made him resent his father and give Fonzie the impression that it must’ve been his fault that his dad left.

You may remember the episode that Fonzie’s father comes to visit during Christmas time and drop off a package. Little does Fonzie know it’s actually his dad giving him the gift and he leaves. When he reads the card and realizes it was his dad, he is overcome with anger and confusion.

When they all read the letter that came with the package, the Fonz realizes that it wasn’t actually his fault that his dad left. Rather, it was other issues that surfaced that made him feel as though he needed to leave. After this realization, Fonz declares that he is feeling fine now after letting go of all that anger that he has built up for years.

Fans took to the comments section of the YouTube video to share their thoughts on this particular scene. “‘I thought I did something wrong, like being born.’ Damn. I know how that feels. Children internalize a lot. Thanks for posting.” Another says, “Fonzie was the greatest. I remember the last episode, he was allowed to adopt a boy who was abandoned. He became a single parent. Fonzie had a lot to class. Great show 👍.” Another fan comments something that Howard Cunningham says in the scene; “He may have been your father, boy, but he wasn’t your daddy.”

Do you remember this scene? It could teach us all quite the moral lesson. Watch the memorable scene below.

Click for next Article
Previous article: Do You Remember Using These Lamps During A Power Outage?
Next Post: Senior Center Creates 1950s Town To Care For Its Alzheimer’s Patients