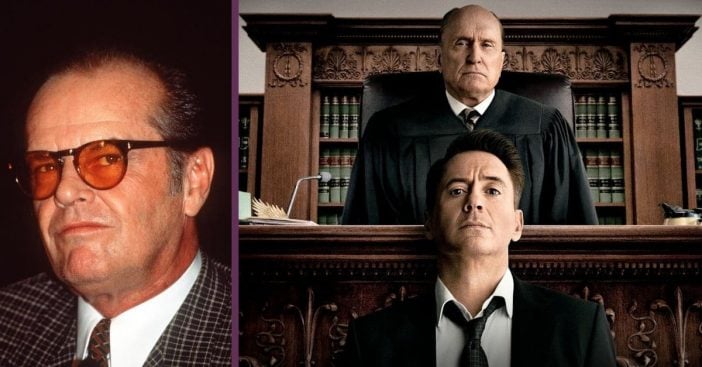 Robert Downey Jr. and Jack Nicholson have both played leading men in their acting careers. Both are extremely talented in their own right. However, Downey Jr. said no to having Nicholson as his father in the 2014 film The Judge and director David Dobkin has revealed why. Nicholson was in talks to play the role of Judge Joseph Palmer alongside Downey Jr. but Nicholson apparently wanted to make some big changes to the role.

“We had two meetings with him. He wanted the script rewritten much more than we did, which was a concern. So we went back, Robert Downey Jr. and I, we sat with him again. Then we just had to realize… we just felt like defending the material. We were concerned with where we would had to have gone to get Jack happy. I had Robert in and we were off to the races and we were basically greenlit on the movie so I didn’t want to go back into writing,” Dobkin reveals.

Why Nicholson was not in ‘The Judge’

Dobkin continues, “But they were really fun conversations. Jack is a hell of a storyteller. It was a different movie. It wasn’t right or wrong notes, it was a little bit different. A little more isolated. A little smaller. Less of the brothers. A little less of what was going on. It was a very interesting film. But right after that, I remember walking out of his house with Robert and looking at him and saying, “I don’t know…”. We had been working on that script for two years. I was like “I don’t know if we can go back to writing.” He was like “No, we’re not. Who’s next?” I was like, “It’s gotta be Bobby Duvall.” He’s like, “Alright.” And that’s how it happened. It was a one-two thing.”

As a result, needless to say, they chose to go with a different leading actor instead of veteran Nicholson. Looking back on everything, Dobkin believes they made the right choice. “You’d do almost anything to get him in a movie,” Dobkin says of Nicholson.

Despite not going with Nicholson, they still have a lot of respect for him as an actor

He continues, “By the way, he hasn’t been in a movie since. Man, he’s one of my all-time favorites. It was a hard call. But I loved the movie, Robert loved the movie, we had a slot, and we were going to miss it if we did as big a rewrite as he wanted to do. And some movies you do that. Some movies you don’t. One of the lovely things about that film… that movie is shot very straight.”

“It’s a coverage movie. It’s all about the performances. I didn’t try and move the camera a lot or push things cinematically. I had [cinematographer Janusz Kaminski], so I let him do the lighting. But there’s a certain joy to the movie of just backing off and watching people just perform the material. Bill Dubuque wrote an unbelievable draft of that script.”

Click for next Article
Previous article: Do You Remember Growing Up Without Air Conditioning?
Next Post: This Old-School Dining Style Is Making A Comeback In The Age Of The Coronavirus