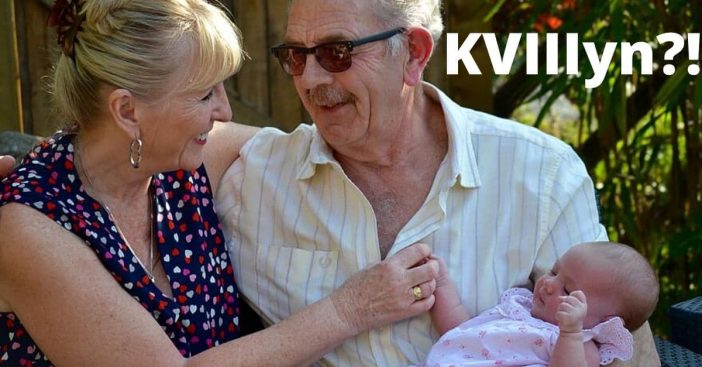 Have you ever heard a really strange or trendy baby name and wondered where it came from? Now, grandparents are complaining to each other about the strange names their grandchildren are named. For example, one grandparent was very upset over her new granddaughter’s name “KVIIIyn.” It is pronounced “Kaitlyn.”

The parent explained, “I’ve always loved the name Kaitlyn but hated how popular it was. So when I found out I was having a girl, my husband suggested we replace the ‘ait’ with the Roman numeral symbol for eight! Now our daughter is truly unique.”

In a survey, a shocking one in five grandparents admitted that they hate at least one of their grandchild’s names! While some parents want their children to have a unique name, grandparents tend to like simple names. They feel that a child would be burdened with a name that is hard to say or spell.

RELATED: Officials Warn Grandparents Should Stay Away From Grandkids During Coronavirus Crisis

Other times, a child may choose an old-fashioned name, that comes with a history for the grandparent. For instance, Sophie seems like an innocent enough name. One grandmother said, “Sophie? Please don’t name her that! How can you do this to me? My husband’s mother came from a very typical hard-core Jewish background. To her, that name connoted a very heavy-set, crude woman — a Sophie Tucker.” [Sophie Tucker was a singer, comedian, and actress back in the early 1900s.]

However, other research shows that most grandparents come around. They may not be particularly happy with the name, but they accept it. Grandparent expert Sally Tannen says that grandparents should just “keep their mouth shut” even if they hate the name.

She continued, “Navigating your relationship with your adult child is really about holding your tongue. The name is something you may hate, but it’s not worth making a thing about.” What’s your take on strange baby names?