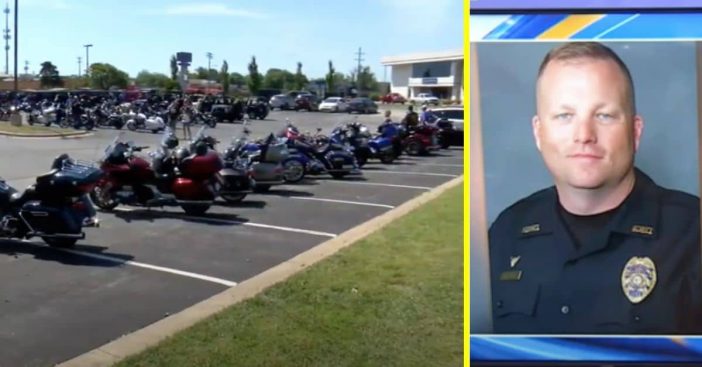 Motorcycle riders and Jeep drivers drove through Springfield, MO this past weekend to raise money for an injured police officer. Officer Mark Priebe was recovering in the hospital after being run over by a car at police headquarters last week. Michael Ngo, owner of Vintage Biker Gear in Springfield, is behind the benefit motorcycle ride.

He heard what happened to Priebe and knew he wanted to take action to raise money for his recovery. “I know it’s a tragedy and nobody wants anything like that to happen to any of their family and I really feel for them,” says Ngo.

Officer Priebe ran over by car, community steps in to help

As a result, more than 120 bikes and dozens of Jeeps donated and rode through the area. In total, they were able to raise $4,000 to give to his family. Many of the bikes driving through for the benefit event had “Prayers For Priebe” stickers on them as well. Their family friend Katie Hough designed the stickers. “We are here for Mark. He is our neighbor and friend as well as a brother in blue. My husband and I are both police officers,” she says. Profits from those stickers are also going towards the Priebe family.

RELATED: This Could Be Harley-Davidson’s Last Chance

Moreover, a GoFundMe has been set up for the family as well, which raised $100,000 in three days. Additionally, two different companies in Republic are selling t-shirts and Big Whiskeys in Republic will be collecting donations as well. All going towards the family.

How you can help, too!

“The southwest Missouri community as a whole has been amazing to their family, really. This is just what you do. This is what you do for your friends,” says Hough. Officer Priebe has been recovering after he had surgery last week to repair and stabilize his spine. Sadly, after the incident, he has been told he may never walk again. However, his family is hopeful for a miracle and says that Priebe will be entering a rehabilitation center soon.

The bikers who took part in the ride have said that the support will not stop here. A Facebook page called “Prayers for Priebe” has been started, where people can express their support and love for Priebe and the family. It also provides donation opportunities for those interested.