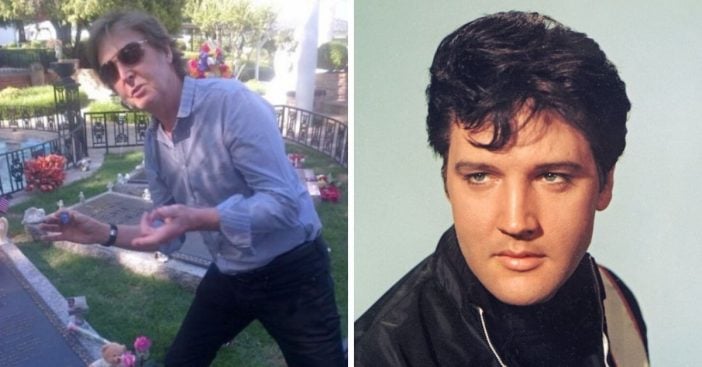 While The Beatles have previously said that they were influenced by Elvis, Paul McCartney never visited Graceland until 2013. He visited the place where Elvis lived long after he died. When Paul was there, he honored Elvis in a very special way.

Graceland posted a little history lesson. They shared a photo of Paul leaning over Elvis’ grave in the Meditation Garden. Graceland wrote, “May 26, 2013: Sir Paul McCartney made his first visit to #Graceland during the Memphis stop of his “Out There” tour. The #Beatles legend placed a personal guitar pick on Elvis’ grave and said it was “so Elvis can play in heaven.” He also briefly played Elvis’ 1956 Gibson J200 guitar. #GracelandHistory @PaulMcCartney”

The Beatles and Elvis met one time in 1965. Elvis invited them to his Bel Air home. The Beatles were so starstruck, they didn’t speak for quite some time! Elvis famously had to say he would go to bed if there was no conversation.

RELATED: Looking Back On The Awkward Meeting Between Elvis Presley And The Beatles

Later, they were not in the best of terms after Elvis called them “anti-American.” He thought this due to their drug use. He was visiting the White House and hoping to help fight drug culture. Paul once said he felt betrayed when Elvis said that.

However, it seems all was well years later. What a special way that Paul honored Elvis when he visited Graceland! What’s your favorite Graceland memory?