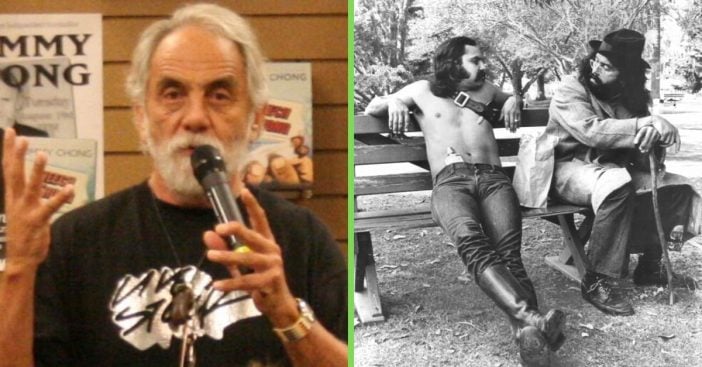 Many know Tommy Chong as being part of the weed-smoking duo Cheech and Chong. The comedic pair was well known in the ’70s but later had a falling out in the late ’80s. They have become friends again in recent years and still make appearances from time to time. Tommy was even seen recently on the popular show The Masked Singer.

In honor of Tommy’s birthday on May 24, let’s take a look at some of his past and learn more about the comedian! He was born in Canada but is an American citizen today. Tommy actually started out as a musician. He started playing the guitar and wanted to become a professional blues musician. He played with a band called Bobby Taylor and the Vancouvers in the early ’60s. They had some success in Motown after being discovered by Diana Ross.

Comedian Tommy Chong started out as a musician

Tommy was soon fired from the band after he took too long to apply for a green card. As luck would have it, this was around the time he met Richard “Cheech” Marin in Vancouver. They started their own band but soon realized that they were more suited to comedy.

Did you know that Cheech and Chong have won a Grammy? Record producer Lou Adler helped them with their standup routine. Eventually, they released a comedy album called “Cheech and Chong” in 1971. They had many successful albums after that and even won a Grammy Award for Best Comedy Recording.

They became tired of touring and had the idea to make a movie. Their 1978 film Up in Smoke was one of the first stoner comedies. The film was mostly improv and audiences loved it. However, things soon took a turn for the worse. Cheech and Chong started to have different ideas of what success was very different. Eventually they split ways.

He went to prison for selling weed paraphernalia

Tommy had a few cameos, but his next big job was in That ’70s Show as Leo, the hippie boss. Around the same time, Tommy and his family decided to start selling weed paraphernalia in-store and online. Soon, the government began to crack down on these types of businesses, and Tommy went to prison for nine months. He served a sentence so his wife and son wouldn’t have to do any time.

While in prison, he bunked with a famous face. His cellmate was Jordan Belfort, none other than the person that the film Wolf of Wall Street is based on. They helped each other write books while in prison and eventually Jordan’s book became the movie. Jordan was portrayed by Leonardo Dicaprio in the film.

Unfortunately, Tommy’s troubles were far from over. He was diagnosed with prostate cancer after being released from prison. He says he treated it with weed, exercise, and diet. In 2015, he was diagnosed with colorectal cancer and treated it with chemotherapy. Luckily, he was declared cancer-free in 2016 and continues to do well. As of 2021, he is active on social media and often posts memes and other photos related to weed and cannabis to entertain his following.