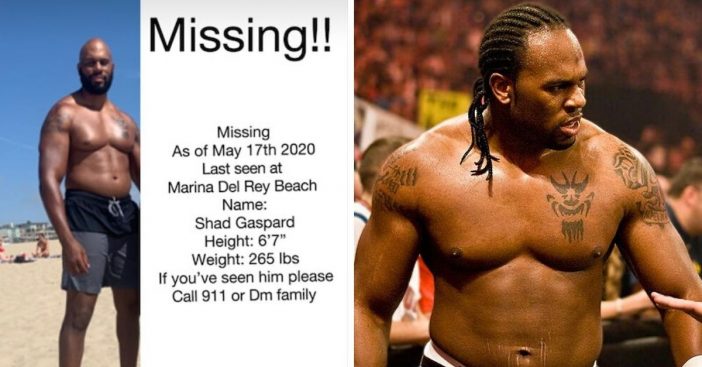 It has been reported that ex-WWE star Shad Gaspard has gone missing after a beach swim. Lifeguards have conducted a massive search to try and locate him. He went for a swim at Venice Beach on Sunday this past weekend with his 10-year-old son. Gaspard and his son were caught amongst a group of swimmers around 4 p.m. during a strong rip current. That’s when lifeguards began racing into the water to pull everyone out.

Gaspard’s son was rescued, but the ex-WWE star was nowhere to be found. An official working with the L.A. Fire Department allegedly told media outlets that they believe the 39-year-old “did submerge.” Additionally, a witness at the scene says that Gaspard directed lifeguards to rescue his son first, which they did. The last time Gaspard was seen was when, apparently, a huge wave crashed down on him.

The photo being used to locate Gaspard with the missing person’s info (seen above) is the last photo taken of him on Sunday at the beach. He had spent the day at the beach with his wife and son.

The story is still developing.

Click for next Article
Previous article: Elvis Presley’s Graceland Set To Reopen On Thursday With Restrictions
Next Post: ‘Leave It To Beaver’ Star Ken Osmond Dies At 76