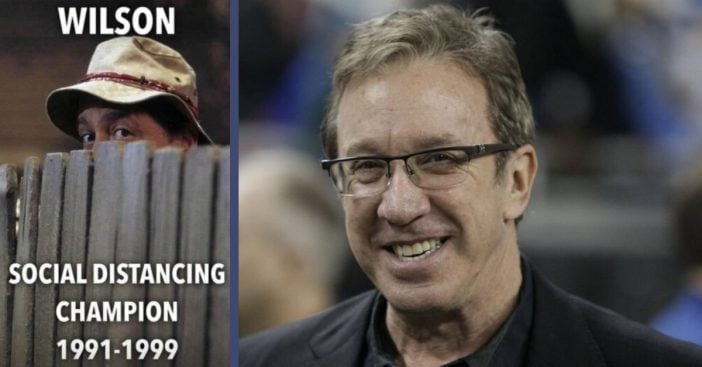 Tim Allen is now joining the list of celebrities who are posting on social media to give us some quality quarantine entertainment. In a post to Allen’s Twitter account, he shares a photo from the ’90s sitcom Home Improvement. The photo shows next-door neighbor Wilson, hailing him a social distancing champion. Many fans remember that on the show, Wilson was often only seen when he peeked over the fence in between himself and neighbor Tim Taylor.

“My dear old friend,” Allen simply captions the post. Fans of the show will remember that the neighbors would often talk when Tim needed some words of wisdom from Wilson. The running gag in the show was that we were only able to see Wilson’s eyes, and not the rest of his body.

Sadly, the man who played Wilson sadly passed away back in 2003. Earl Hindman was behind the eyes of the man we grew to know and love. He died just a few years after the series finale. Since posting the funny picture to his social media, it has been well-received by fans of the show on Twitter.

“And to this day, many years later, he is teaching us with his wisdom. Stay safe Tim!” one fan says. Another writes, “Wilson was the King of social distancing.” So true! “I wish he was still here so he could’ve made some appearances on Last Man Standing,” another fan says. We sure do miss Wilson and his words of wisdom!

This was surely just the smile and laugh we needed today. Thanks, Tim Allen! Take a look at the video below to relive some of Wilson’s best moments on the show.

Click for next Article
Previous article: Sting Sings “Don’t Stand So Close To Me” With Jimmy Fallon And The Roots
Next Post: Alex Trebek’s Wife Shares Uplifting Message Amid Coronavirus Outbreak