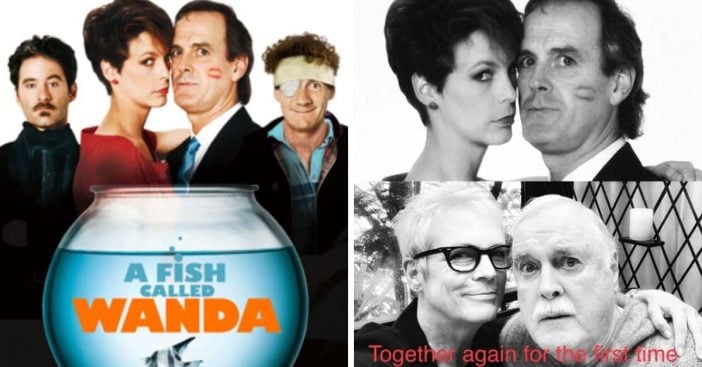 Jamie Lee Curtis has officially reunited with her co-star of A Fish Called Wanda, John Cleese. The two starred in the comedy film together as lovers. Jamie posted the photo of their reunion to her Instagram account. She writes, “Something’s fishy here…. oh right, WE ARE OLD! Wanderful lunch with Mr. Cleese. #notdeadyet”

The photo showcased a picture of them from the movie, and another photo of their reunion. So much has changed, and yet, not much has changed at all! It was their first meeting in years. Jamie adds, “Together again for the first time.”

Fans were sounding off in the comments section, absolutely loving the reunion picture. “I would LOVE to see a photo of you, John, Kevin and Michael – recreating the movie poster for Wanda!” a fan writes. Another person says, “Your youthful spirit will never allow you to be old. And you’re more beautiful now❤️as the love in your heart shines through your face. And that was one of my favorite movies!”

The 1988 film A Fish Called Wanda is about “four very different people teaming up to commit armed robbery, then try to doublecross each other for the loot,” according to IMDb. Following six weeks of a wide-release in the U.S., the film would reach number one at the box office. The film would gross $62,493,712 in the U.S. It also became the #1 rental video in the U.S. in 1989.