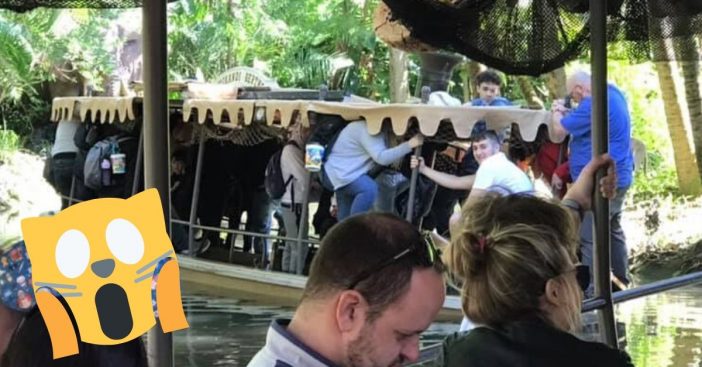 A Jungle Cruise boat ride sank at Disney‘s Magic Kingdom yesterday. The ride is featured at many Disney parks, but the incident happened at the Orlando, Florida location. For instance, the ride simulates a riverboat cruise that goes down rivers in Asia, Africa, and South America.

On the cruise, you see many different animatronic animals. The tour is led by a Disney Cast Member and it is often described as a humorous tour. However, it wasn’t so funny when the boat began to sink! Tourists say their feet were in the water as they stood on the seats, trying to stay out of the murky water.

The Reedy Creek Fire Department responded to the scene. They got everyone out quickly and the ride was reopened after 105 minutes. Many took to Twitter to talk about the incident. Some people wondered what people thought if they had never taken a ride on the Jungle Cruise before! Can you imagine if you thought it was part of the ride?

RELATED: Crazy Rules That Passengers On A Disney Cruise Have To Follow

Others wondered if it was a publicity stunt ahead of a new Jungle Cruise movie. The movie, titled Jungle Cruise, comes out in theaters this summer. It stars Dwayne Johnson and Emily Blunt.

According to Wikipedia, the film is “set during the early 20th century, a riverboat captain named Frank takes a scientist and her brother on a mission into a jungle to find the Tree of Life which is believed to possess healing powers. All the while, the trio must fight against dangerous wild animals and a competing German expedition.”

In conclusion, learn more in the story below: