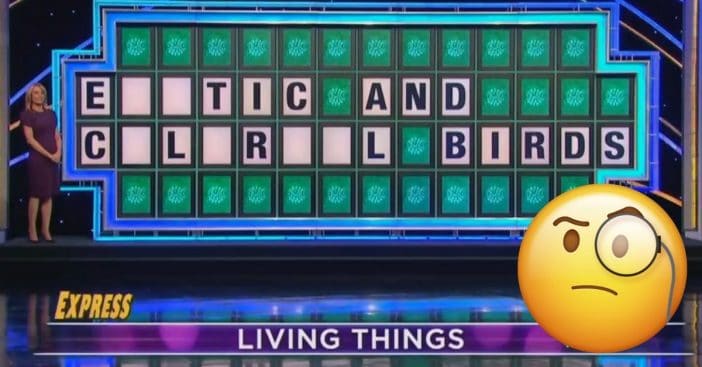 Two Wheel of Fortune contestants might have won big if not for one surprising choice. During “Girlfriend Getaway,” contestants throughout the week can win a luxurious trip. But on Thursday night, best friends Marleta Robinson and Nancy Krol missed their opportunity. With their Wheel of Fortune prize inches from their grasp, the duo guessed the letter… Q!

Vowels are, of course, incredibly useful, but at this point, they could only work with consonants. Even without that helpful option, there are a lot of incredibly frequent letters to guess from. Their clue reads as follows: “E _ _TIC – AND – C _ L _ R _ _ L – BIRDS.” Viewers found themselves reeling in shock and many still aren’t over how the best friends answered the question.

Like the English language, Wheel of Fortune doesn’t use Q that often

Without a doubt, there are a lot of important words containing the letter Q, but it doesn’t see much use in Wheel of Fortune answers. Sure, you can ask a question with a quote when you have an inquiry you need to quell. But all of those require a U and by the context of the clue, nothing would have made sense with that combination.

Speaking of, fans had a lot of questions after they heard Robinson and Krol answer. The #WheelofFortune tag on Twitter became flooded with teasing banter and bemused reprimands. Some even mourned what surely marked the end of those women’s friendship. As Fox points out, their only possible answers using the Q and U combination would leave: “EQUTIC” and “C_L_RQUL.”

They could have had it all

Yahoo also reports that the Q incident really put a stop to the friends’ Wheel of Fortune success that night. By not doing well there, they lost the chance to advance to the bonus round. Overall, they also lost the grand prize, an $11,772 trip to Costa Rica. Ultimately, they did get to leave with $7,300.

Viewers joked that hopefully those winnings will preserve this friendship. Girlfriend Getaways Week offers women money for the chance to go on a trip away from the hustle and bustle of everyday life. Marleta Robinson and Nancy Krol actually ended up pretty close to securing a win, if only they hadn’t guessed such a rarely-used letter, especially given the context of the clue.