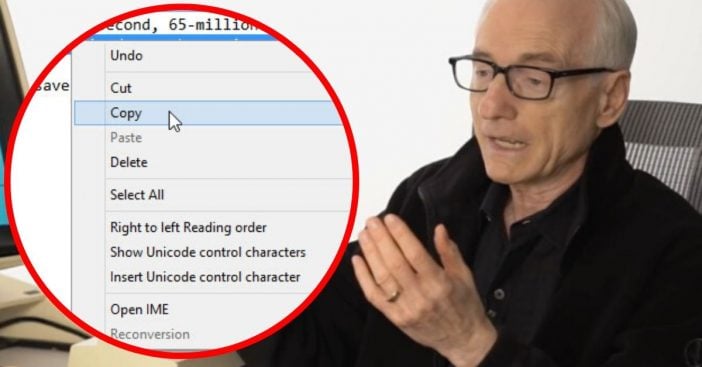 Larry Tesler, who is the computer scientist who invented cut, copy, and paste, has sadly died at the age of 74. He was born in the Bronx, NY in 1945 and would, later on, go on to study computer science at Stanford University in California. The biggest focus for Larry was human-computer interaction (user interface design). His skillset would go to work with big corporations like Amazon, Apple, Yahoo, and more.

The Xerox Palo Alto Research Center (PARC) announced the news of his death on Wednesday, February 19th. He was a pioneer for developing ‘revolutionary ideas’, as PARC puts it, like the cut, copy, and paste. If you’re an avid computer user, it’s hard to think about a time when there was no cut, copy, paste.

The inventor of cut/copy & paste, find & replace, and more was former Xerox researcher Larry Tesler. Your workday is easier thanks to his revolutionary ideas. Larry passed away Monday, so please join us in celebrating him. Photo credit: Yahoo CC-By-2.0 https://t.co/MXijSIMgoA pic.twitter.com/kXfLFuOlon

“The inventor of cut/copy and paste, find and replace, and more was former Xerox researcher Larry Tesler. Your workday is easier thanks to his revolutionary ideas. Larry passed away Monday, so please join us in celebrating him,” Xerox’s full statement reads on their Twitter.

RELATED: 1970s House Of The Future Had ‘Smart’ Features We’re Only Just Getting

Larry’s career in computer science actually took off with Xerox, but he would soon move onto Apple alongside Steve Jobs in the 1980s. He spent 17 years at that company and would even go on to become chief scientist in 1993. It was there that he invented the cut, copy, paste command for computers.

Revolutionary work with Apple before it became a tech giant

This incredible idea that has now become such a basic part of computers was first implemented into Apple’s software on the Lisa computer in 1983. The original Macintosh computer releases the following year.

He has made great strides in the world of technology over the last several years. He writes on his website, “I have been mistakenly identified as the father of the graphical user interface for the Macintosh. I was not. However, a paternity test might expose me as one of its many grandparents.”  Rest in peace to the great Larry Tesler. Without him we might not have some of the incredible features our computers have today!

Click for next Article
Previous article: A Common Fib Crew Members Tell Passengers — And The Cruise Ship Secrets They Don’t Tell
Next Post: Can You Solve This 9-Year-Old’s Tricky Math Problem?