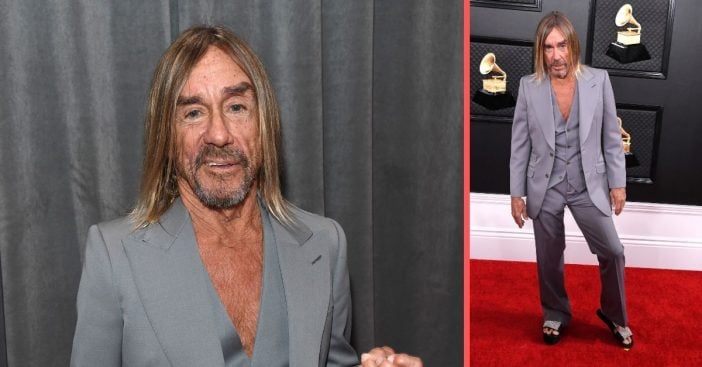 Punk rock legend, Iggy Pop just received his first Grammy award at the age of 72. For years, Iggy has been a huge influence on other artists, but he was never awarded music’s biggest award. For this reason, he said he was extremely surprised to win this year, especially since he was honored with the Lifetime Achievement Award.

Iggy says he was even a little suspicious to get that call. He joked, “I said, ‘I’m not talking to them!’ It’s been, what? 50 years? No Grammy! But they said, ‘You won.’ And I said, ‘Well, is there anything I have to do? Is it contingent on anything?’ And they said, ‘No. It can never be changed.’ So I thought that was okay. That was nice.”

The punk rocker said, “I suppose I kind of feel as if the Academy and I met halfway, something like that. It’s sort of like a problem has been eliminated, put it that way… These things have been happening in my career for the last 10 years or so… At first, it was almost grim. Like, ‘Okay, I got there, I got that. It doesn’t make Raw Power any better or any worse.’”

He continued, “But after a while, I came to appreciate that every person has a point of view. It took me a long time to appreciate that a lot of people have points of view that are nothing like mine whatsoever, but I need to respect them. Whereas when I was 25, it was like, ‘Agree with me or death.’”

When asked about the performances he was most excited for at the Grammy awards, he admitted he wanted to see Aerosmith and Billie Eilish. He said he likes her because she is a little bit more “obscure.”

In addition to receiving the Lifetime Achievement Award, Iggy recently released his 18th studio album called “Free.” Iggy said that he hopes to leave behind a simple legacy. “‘If he can do it, I can do it,'” he said. “That would be pretty much it. I would hope that it would encourage some little punk to have a whack.”

Click for next Article
Previous article: Sharon Osbourne Reading Out Rap Nominations Was The Top Highlight Of The 2020 Grammys
Next Post: Washington Redskins Coach Ron Rivera Sends Military Veteran To The Super Bowl