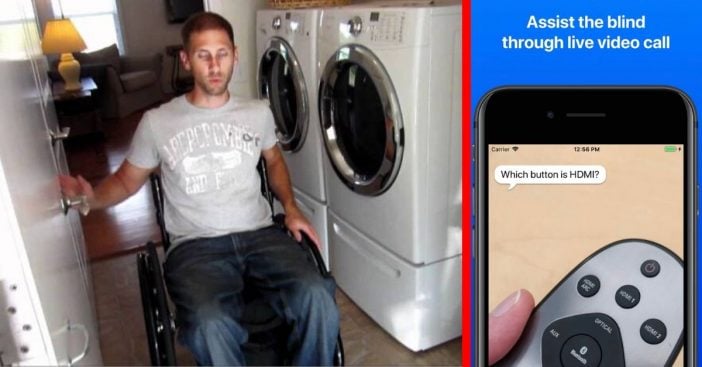 Be My Eyes is an app created by Hans Jorgen Wiberg in 2015. The app pairs volunteers with the blind/visually impaired so those volunteers can then help the blind person with small tasks. These tasks include reading the expiration date on foods/drinks or helping hem find out what the color of a shirt is. Volunteers are paired with a blind person in need of help through video calls.

Erum Salam of The Guardian was able to get in touch with CCO Alexander Hauerslev Jensen and find out the origin of the app. Jensen is visually impaired himself and recently spoke at the Danish Association of the Blind. While he was there, he learned that simply Facetiming friends and family when in need of help with something could be expanded upon. That’s why he decided to make Be My Eyes, which could prove as a much more efficient way to make this happen for many. It also allows its users to be more independent and not have to constantly rely on personal relationships.

There is an app called "Be My Eyes" where visually impaired people can video call people that can help them in situations where they need to see.

There are over 3.1 Million volunteers available for 176,000+ visually impaired people needing help.

“When we launched, we didn’t know if people would be willing to volunteer time to help complete strangers,” says Jensen.“But within the first 24 hours, we had more than 10,000 volunteers.”

RELATED: Blind Senior Dog Got A Seeing-Eye Puppy To Help In His Old Age

Salam signed up for the service as well but informed Jensen that he had yet to receive any calls. This is because the number of volunteers is outweighing the number of blind people needing help (which is a heartwarming reason in and of itself). “Stay very close to your phone,” Jensen advises, “because you have to be quick to get them”.

Jensen continues to talk about the fact that the app has so many volunteers already. “The fact that we have so many volunteers enables us to have a really fast response time. I see it as a good problem,” he says. “It takes a few minutes to make a big impact on someone else’s life. This is a combination of technology and human generosity.”

Salam writes about their first call. The man on the line was from Pakistan and needed help reading the box of his insta kheer (south Asian rice pudding). However, the directions were in another language- Urdu. That’s when Salam asked their new friend to hold for a moment so Salam could look up the translations. “Thank you, ma’am,” the man on the other line says. “God bless you.” It took just a few minutes to completely make someone’s day.

How Internet users are reacting to the service

Many people online have also shared their experience with the app and are praising it for bringing volunteers and the blind together.

Downloaded an app called BE MY EYES last week. Got my first call today and helped a blind man pick out the right socks!!! Way cool.

“Downloaded an app called BE MY EYES last week. Got my first call today and helped a blind man pick out the right socks!!! Way cool,” a Twitter user writes.

I downloaded the “Be My Eyes” app and had my first call with a man who lost his slipper in his house 😢 he was so sweet. I was like “I still don’t see it… OOOP there it is”😂

Another Twitter user says, “I downloaded the “Be My Eyes” app and had my first call with a man who lost his slipper in his house.” So wholesome!

For those who are able to video chat and love to help people, Be My Eyes may be the next best thing.

Click for next Article
Previous article: Last Days Of ‘The Love Boat’ – A Photo Tour Of The TV Cruise Ships
Next Post: Things That Turned From Trashy To Classy Over The Decades