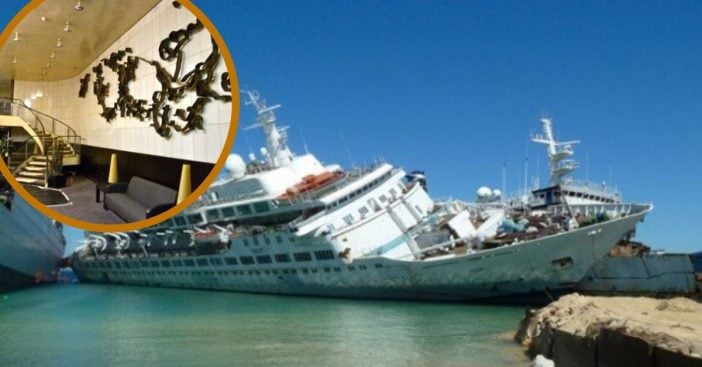 Blending comedy with drama, The Love Boat followed Captain Merrill Stubing and passengers aboard a luxury cruise ship. The captain, crew, and visitors enacted various fun and romantic situations for each episode. Between its interesting setups and a changing cast of stars, The Love Boat gained admirable traction over the years.

Because of its success, fans love replicas related to the show. Likewise, boat aficionados feel drawn to it because of the setting. Peter Knego is something of both, a cruise ship historian, journalist, and photographer.  Though initially uncertain about The Love Boat, Knego grew to appreciate what it did for the boating industry. His passion helped him gather as many photos related to the show’s ship and the island as he could. Keep reading for a dose of nautical nostalgia & check out images of the now-demolished, always iconic – Love Boat Cruise Ships.

No Cruise Ships From ‘The Love Boat’ Are Out At Sea

Nothing lasts forever. But photos certainly help preserve a prop’s legacy. They tell those who come much later what a set looked like. Loving photography helps preserve history for future knowledge and enjoyment. Though the cruise ship guests stayed on in The Love Boat, S.S. Pacific Princess is gone, people can still see it.

Peter Knego got interested in The Love Boat because of his love for cruise ships – and boats in general. He sees them as works of art. Initially, though, he felt slighted by the show. In his initial view, the show did not appreciate the ship. His fondness for all things floating is evident in his dedicated pursuit of documenting the ships.

For Knego, every part of a ship tells its story. Eventually, he saw The Love Boat as an important part of cruise ship appreciation history. As a result of this change of heart, he resumed watching the show and getting photographs with renewed gusto.

“Ships used to be beautiful,” Knego mused in an interview with MeTV. “If you Google the Queen Elizabeth, the first ship with the two smokestacks, and look at the architecture, the way that ship was designed — it not only was functional, it was designed so that when it entered a harbor, everybody would see the smokestacks and think: ‘That is spectacular. I want to sail on that ship.’”

The Love Boat, Knego believes, helped others understand how meaningful cruise ships can be. “All the power to The Love Boat for creating a whole new industry that wasn’t there before,” he said with passion. As a boat enthusiast himself, he actually saw the way ships changed as The Love Boat grew in popularity.

That doesn’t come without some downsides, though. While Knego feels the show helped cruise ships grow in size and appeal, he does feel wary of the design choices seen since the show aired. “Now cruise ships are just giant boxes.”

Passengers enjoyed the utilities, if not always the view

Now, dullness replaces grandeur, Knego feels – in so many words. “They’re not meant to look pretty on the outside. They’re just meant to be functional and use as much space as possible for generating revenue, basically. So they are just ugly boxes. Some of them are just downright hideous, but that’s just the world we live in. That’s what people want.”

This ship enthusiast walks a line between reverence for history and disappointment for the course it has taken. It’s a difficult path to tread, but always Knego maintains an eye for appreciation. Even if he doesn’t agree with a design choice, he understands the importance of immortalizing it.

Love Boat Pictures Act As Postcards For Other Enthusiasts

Knego traveled to Turkey in 2013 to catch the Pacific Princess in her final days of life. He saw her almost capsized but even that didn’t deter him from his photographic mission. He took as many pictures as he could over time, inside and out. All of these images help the ships live on in a different form… postcards!

These aren’t just any postcards, though. Owners can appreciate the old ships in their former glory. Though they’re not entirely the ornate, carefully-designed art pieces Knego dreams of, they are still quite a sight to behold.

RELATED: The Stars Of The Love Boat: Then And Now

Click for next Article
Previous article: The True Story Behind Dolly Parton’s Song “I Will Always Love You”
Next Post: ‘Be My Eyes’ Is A Heartwarming App That Is Pairing Blind People With Helpers