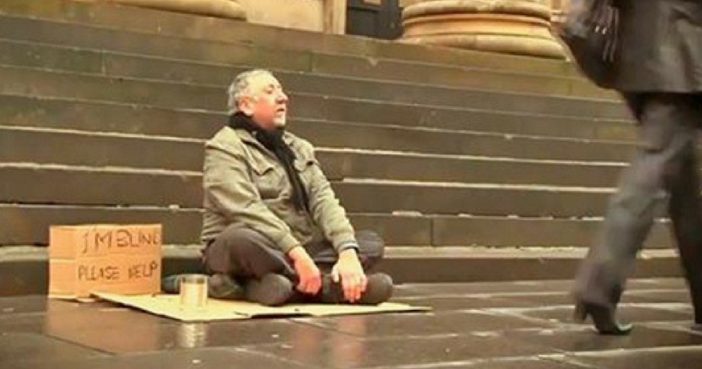 One Saturday morning, a man was sitting on the ground in front of a building begging passersby’s for money. He was an older man, with his shoes were worn out and his clothes had seen better days, and he sat with hunched shoulders on the ground.

On the ground in front of him was a small metal tin and in his hand, he had a sign which read: “I am blind, please help.” So far, he had collected only a few small coins. But then something happened.

A woman approached, wearing a well-fitted blazer made from an elegant black fabric, along with black pants. When she reached the beggar, she stopped briefly, put her hand into her pocket, and threw a few coins into the bowl.

The woman started to walk away when suddenly stopped as if struck by inspiration. She turned back to the beggar and took the sign into her own hands. After looking at it briefly, she turned it over and wrote something on the other side. Once finished, she handed the sign back to the blind man so that the new words were visible. After saying goodbye, the elegantly dressed woman was on her way. Thoughtfully, the beggar listened to the fading sound of the woman’s steps.

Shortly afterward, something changed: The bowl was filling up more quickly than usual. The blind man could not believe it.

Never before had people been so generous. He wondered what the woman could have possibly written on his sign. He soon found out when the woman greeted him on her way back from wherever she had gone. The blind man recognized her voice and asked her what she had written? The answer was bewildering: “Only the truth. I said the same thing you did, only with different words. The sign now says, ‘Today is a wonderful day and I cannot see it.'”

The wish behind both sentences was the same, but the message was different. The original sentence said that the man was blind and needed help. Once changed, the sign stated that people could be happy to enjoy that wonderful day using all of their senses.

A blue sky, blooming flowers — such things can beautify everyday life. Far too often we do not see the beautiful things because we focus on what troubles us, or on the things we do not have. Every day, there are a thousand reasons to be grateful. You can focus on hardship, or go through the world with a smile.