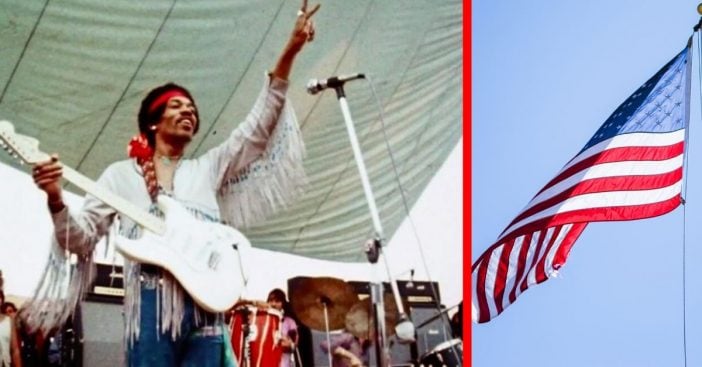 Just a month after Woodstock, Jimi Hendrix participated in a 1969 interview with Dick Cavett to talk about a part of his set at the festival. He played the National Anthem while performing there. It earns a bit of backlash from people who thought he was disrespecting the National Anthem by doing so. His answer to those people was simple. “I’m an American, so I played it,” he says.

The interview was an interesting one. It gives insight into both his mental state at the time and also how he perceived his own Woodstock performance. In the interview, he stated that he had three nervous breakdowns over the course of his fame and also admitted he was running on “eight minutes of sleep” for that interview. Almost exactly one year after the interview with Cavett, Hendrix sadly died from asphyxiation after taking a large number of barbiturates.

Jimi Hendrix on playing the National Anthem at Woodstock: “I’m an American, so I played it.”

It was a pretty crazy yet incredible day for people like Hendrix who were playing the festival. A large number of people attended the festival, which was also paired with rainy conditions. The festival was opened to all, free of charge, and Hendrix comments on this by saying that “a festival of 500,000 people is a very beautiful turnout, you know?”

As a result, Hendrix is noted as the highest-paid performer of the festival. He and his band, Gypsy Sun and Rainbows, were originally going to play at midnight on that Sunday. Due to weather conditions, they were pushed back to the following morning. Hendrix reveals that he was up all night the day before, yet his performance was still breathtaking. Watch the incredibly fascinating 1969 interview below.

Click for next Article
Previous article: Do You Remember The Blizzard Of 1978?
Next Post: 6-Year-Old Harshly Critiques Shirley Temple Drinks And Shares Reviews Online