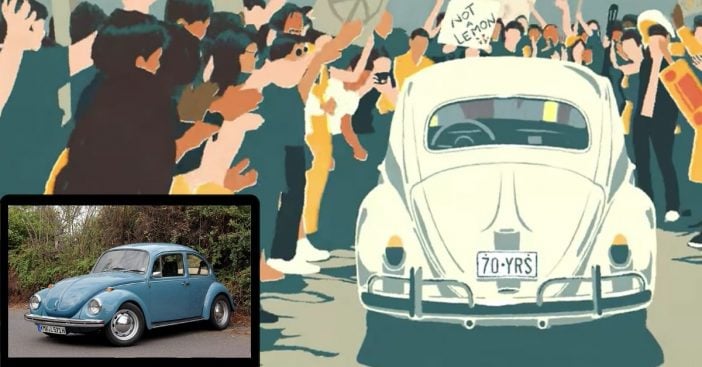 We reported a few months ago that Volkswagen would be ending production of the iconic Beetle. This action was announced by their new ad campaign called ‘The Last Mile.’ The commercial has officially launched and it is nothing short of heartfelt. The commercial includes an animated film with the song “Let It Be” by the Beatles playing in the background. Very fitting! However, in the commercial, the song is performed by the Pro Musica Youth Chorus children’s choir.

Animated cameos of some pretty well-known people also appear in the commercial. One cameo is by Andy Warhol, who created art pieces that featured the Beetle. Also included is Kevin Bacon, whose character drove a Beetle in Footloose. At the end of the commercial, the car begins flying away and appears to change into a bug with the caption, “Where one road ends, another begins.”

As Volkswagen discontinues the production of such an iconic car, they announced that they will be unleashing a new, electric vehicle. The final Beetle car was unleashed to the public in July 2019 in Mexico. That assembly line will now produce the Tarek SUV. As a nod to moving towards the future, Volkswagen decided to sell off its last few Beetles on Amazon.

Johannes Leonardo Chief Creative Officer Leo Premutico talks about the end of the Beetle and the commercial. “This animated film pays homage to the imprint this car has made as we make way for an exciting future of electric mobility for the masses,” she says. “When creating the campaign, it was very intentional that we didn’t put any one person or moment on a pedestal. The Volkswagen Beetle was the great equalizer for society and culture at large. This isn’t one person’s goodbye or a company’s, it’s everyone’s goodbye.”

As we say “goodbye” to this legendary vehicle, at least we still have this heartfelt commercial to remember it by. Take a look at the short, animated commercial below!

Click for next Article
Previous article: Celine Dion Honors Her Late Husband On The Anniversary Of His Death
Next Post: Richard Gere Talks About His New Movie ‘Three Christs’ And Its Focus On Mental Health