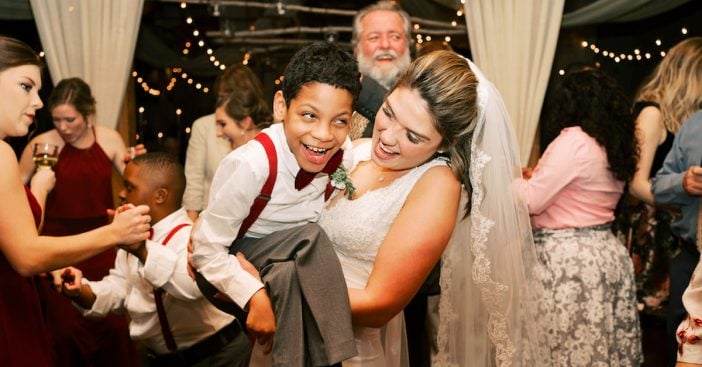 A special education teacher out of Georgia recently had three of her students walk her down the aisle at her own wedding. Her students are all 10 years old and have disabilities, and she insisted on having her “favorite students” there to celebrate her special day with her. Dominic May, Jay Hurt, and Korde Solomon are the three lucky children who were able to play such a huge role on that day.

“Especially just having five or six kids, they become your own,” 25-year-old Colleen Powell tells news outlets. “Since I don’t have any kids of my own, I call these three my babies.” Powell is a teacher at Lakeview Academy in Milledgeville, GA.

“I’d always said my boys are going to be in my wedding because they’re just the biggest piece of my heart,” Powell continues to TODAY. “They mean as much to me as anyone else that was there.”

Powell’s father accompanies her as she walked down in the aisle, in addition to Jay and Korde. The two would also serve as ring-bearers. “They’re just the biggest piece of my heart,” Powell says. “They mean as much to me as my bridesmaids did, and as much as my husband’s groomsmen.”

They are able to communicate in their own, special way

The boys have difficulty speaking, which is why Jay carried around a device with a pre-recorded message that announced, “Here comes the bride.” The wedding officiant would ask, “Who gives away the bride?” and Dominic would play a message that says, “Her parents and I do.”

“They can all communicate their wants or needs or their feelings,” Powell says, revealing that this is their main source of communication during class as well. Camellia Hurt, who is Jay’s mother, was in disbelief when her son was asked to be in the wedding. “Originally, I thought she just kind of said it to be kind because I was in the classroom while she talked about planning the wedding,” Hurt says. “She was serious.”

The parents of the children were so happy to see their kiddos so involved in the wedding. “Korde danced going down the aisle, he had to bust out a little dance move. They started clapping,” says Shiquana Solomon, Korde’s mother. Dominic’s mom, Ingried Banks, says, “They will always remember that.”