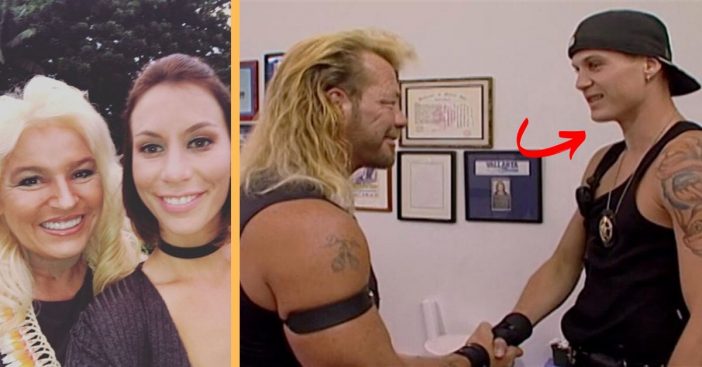 Baby Lyssa Chapman, best known for starring on the show Dog the Bounty Hunter, has accused a former co-star of trying to steal and sell her stepmom Beth’s ashes. She has called out her cast member by name (Justin Bihag) in a series of tweets, accusing him. “@JustinDBihag23 has stolen from my family. He’s a drug addict, a liar, a loser piece of sh*t who continues to harass me and my family,” she writes on Twitter.

Bihag was often referred to as Dog and Beth’s “nephew” despite having no familial relation. Lyssa leads up to these serious allegations with another claim that he’s been harassing her. In her claims on social media, she includes a series of Facebook messages sent by Bihag in addition to his phone number. Lyssa tells people following her to “call this punk.” She also says that Bihag is taking advantage of Dog as he continues to mourn the death of the love of his life.

“[Justin Bihag] had been harassing me for months. He’s a punk ass b— who’s using my dad’s vulnerability against him,” Baby Lyssa writes. “[He] has tried to rob my family TOO MANY TIMES. ALLYEE ALLYEE OX AND FREE YOU LITTLE B—.”

RELATED: ‘Baby Lyssa’ Chapman Shows Her Own Daughter’s Senior Prom Photos And She’s All Grown Up

She continues, “[Justin] TRIED TO STEAL [Beth’s] ASHES FROM OUR FAMILY HOME. AND SELL THEM ON EBAY. WHAT YALL THINK ABOUT THAT ?!”

A response from Justin

While replying to a fan in a now-deleted tweet, she’d adding to the accusations by naming Bihag and another party as well. “They tried to sell many items from our home including [Beth’s] ashes,” she writes. “Amongst many other things I HATE THEM FOR.”

Bihag apparently did respond to the series of tweets, but his own tweets are now deleted. He responded, claiming that Lyssa was intoxicated when she made the accusations. “So, ‘I guess’ it’s ok nowadays, to get white girl wasted, give out someone’s number, spread drunk babbles that aren’t even true, when I’m next to your father right now [Baby Lyssa] working hard as usual, and I’m sure this was just a bad nite! We all have them! Aloha!” he writes.

Bihag continues, “No, and no, read, White Girl Wasted, I wouldn’t be by your dad if it was even close to true!” he wrote. “I’ve had bad nights, this u know! More lately for everyone so, and look at HISTORY, I’ve always came back when needed to! #BeforeDayOne”

He adds, “Too funny, anybody can gang up and make something of nothing because of a drunken or bad nite, and believe it, I stand alone against anybody! Nobody is seeing what Uncle wants and needs! I think that’s the problem!” Yikes!

Click for next Article
Previous article: Mariah Carey Releasing New Music Video For “All I Want For Christmas Is You”
Next Post: Kate Hudson’s Whole Family Takes Christmas ‘Merry Seriously’