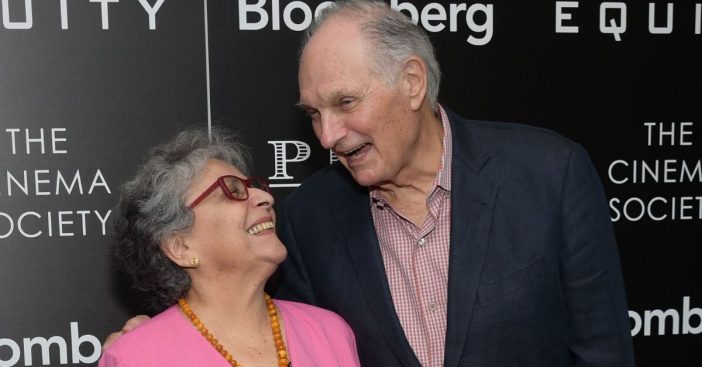 Alan Alda opens up about his six-decade marriage to wife Arlene and jokes that she “must have contemplated murder” at certain points. He’s been married to the same woman for 60 years and former Vanity Fair veteran Krista Smith had him on her podcast to talk about his marriage. She asks, “Did you ever contemplate divorce in your six-decade marriage?” That’s when he responds, “No, but I’m sure my wife contemplated murder,” the 83-year-old jokes.

Alda’s most recent acting credit is in Noah Baumbach’s Marriage Story, where he plays the role of a divorce attorney. The film is incredibly raw and emotional, taking a good hard look at all the different aspects of divorce. I’m sure Alda is happy to report, though, that his “marriage story” is nothing quite like that!

Alan Alda’s wife “must have contemplated murder,” he jokes

Alda, while on the podcast, discusses acting while battling Parkinson’s disease. The disease commonly causes its victims to shake and it’s usually completely out of their control. “Sometimes I don’t know when I’m shaking … I came back from an interview, I said to Arlene, ‘It’s amazing. I must be getting better. [I] didn’t shake at all.’ And then I looked at video, and I didn’t realize I was shaking,” he explains.

He does say that “as long as it doesn’t interfere with the audience’s focus on the scene and the character, it’s just an attribute.”

Alda continues on by mentioning other actors who had disabilities, yet still made acting work. “Lionel Barrymore acted for 15 or 20 years in a wheelchair … all his characters were wheelchair-bound and nobody thought twice about it. I’m playing Ray Donovan’s psychiatrist on ‘Ray Donovan,’ and when they realized I had Parkinson’s, they said, ‘You mind if we write that into the script?’ … But now I’m doing scenes where the character I’m playing has a worse tremor than I have, and I have to fake it.”

Check out the video below to watch Alan Alda discuss his work with Netflix’s Marriage Story!