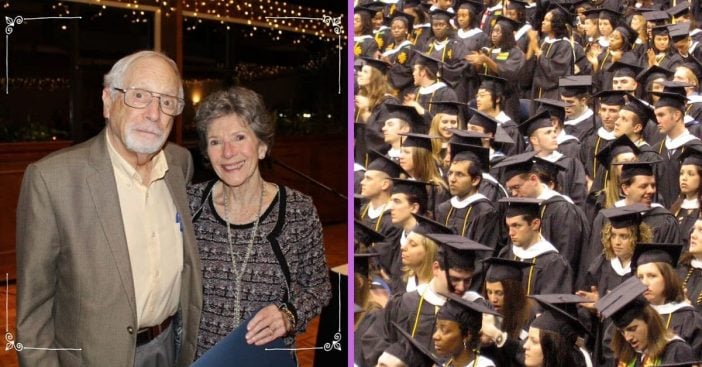 This weekend, many college students will graduate from the University of North Carolina Wilmington, including 80-year-old Leita McCormick. She decided to go back to school after realizing that all of her children and grandchild had a degree. Leita realized it was something she’d like to achieve in her life.

She started college in 1966, but then got married and moved around a lot because of her husband’s job. She tried to keep up with college classes, but the moving made it difficult. So, Leita never finished her degree, but it was still on her mind.

80-year-old will graduate college this weekend with an award

When her husband died from Alzheimer’s disease, she knew she had to keep busy. She said, “It was time, it was time to devote myself to something for me to accomplish.” Now, she will graduate this weekend with her entire family watching proudly.

She continued, “I really didn’t [worry about finishing] because I knew I had it in me, you know, to do it, and I … why not, you know? If you were to ask what was the most difficult part, I’ll just tell you it is getting up to grade on the computer. I mean… believe me, it was all very new to me!”

Despite any challenges, she was an excellent student. In fact, she will also be receiving one of the highest awards in the communications studies department. Leita will be honored with the Cunningham Department Exemplar Award.

One of her professors said this about Leita receiving the award: “It wasn’t because she was a novelty act. It was because we sat around and said who blended academic achievement, personal growth, embodied our ideals, embodied what we call our core skills that we want all our students to have — civility, responsibility, curiosity, problem-solving — all of these things we know matter in the marketplace, matter in life and we said who is that person and we all went ‘it’s her.'”

So, what does Leita plan to do with her degree? She said she wants to recommit herself to music, specifically playing the piano and volunteer. She also said she made some great friendships, even though many of the students were closer to her grandchildren’s age.

In conclusion, check out another similar, heartwarming story from a few years ago:

Click for next Article
Previous article: Bride-To-Be Admits She Cried When Fiancé Proposed To Her With The ‘Ugliest Engagement Ring’
Next Post: Animals At Rescue Shelter Get To Choose Their Own Presents From Under The Christmas Tree