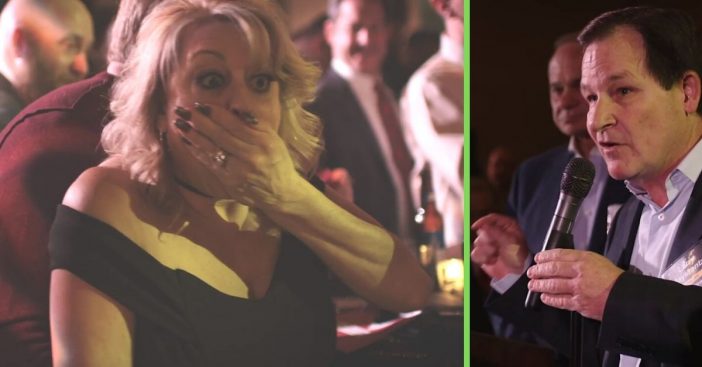 One company gave its employees a holiday bonus of a lifetime. The real estate company St. John Properties in Maryland had a surplus of $10 million. While many companies give large bonuses to executives, this company split the $10 million amongst all of their employees.

The employees were surprised at their annual holiday party. St. John Properties employs 198 people and the average employee received around $50,000 as a bonus. However, the money was given out based on how long they worked at the company. For instance, a brand new hire that hasn’t started work yet received $100. The largest bonus was $270,000! Can you imagine?

Employees were given $10 million in bonuses

Stephanie Ridgway, an assistant project manager at the company said, “When I opened the envelope, I was in total disbelief. I couldn’t believe I saw what I saw. I don’t even have words to properly describe how I felt, it was just amazing and incredible. I’m still in shock. It’s definitely life-changing.”

RELATED: Amid Sears Bankruptcy, Company Wants To Pay Execs Over $19M In Bonuses

He continued, “It was truly one of the most amazing things I’ve ever witnessed in my life. Everyone was all overwhelmed with emotions. They were screaming, crying, laughing, hugging. People were lining up to hug us, and kiss us, and shake our hands, and they told us story after story of what they’re going to use their bonuses for. People are now debt-free, they’re paying off their credit cards, their mortgages, their tuition, and student loans.”

In addition, the company also flew in all of its out-of-state employees and their guests. St. John Properties has eight different branches around the country. What a great story of holiday cheer!

In conclusion, Lawrence said, “We are so proud of our employees. They are the foundation and the reason behind the success of our company. And we wanted a big way to thank them, and I think we were successful in doing that.”

Click for next Article
Previous article: Leather Jacket From ‘Grease’ Regifted To Olivia Newton-John After Being Auctioned Off For $243,000
Next Post: The Nostalgic Trailer For ‘Ghostbusters: Afterlife’ Is Here