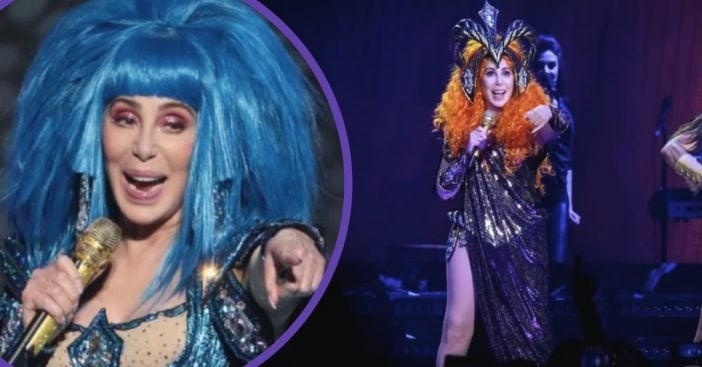 Cher recently shows what she’s all about to the crowd at Madison Square Garden in New York, taking full command of the stage. She proves that age is just a number and that she has no plans to slow down. For example, at 73 years old, her shows are as wild and entertaining as ever. Since the early years of Cher, she’s never held back in expressing herself, whether it be simply through her performance or through her many crazy costumes!

At MSG, Cher took the stage donning a bright blue wig and super-sparkly purple dress. Then, at some point during the show, she would take it to the next level. She removes her dress, revealing a bodysuit that resembles a warrior costume. For instance, her backup dancers were also in on the outfit theme with gold, Roman-style outfits.

Cher dominates the stage at MSG

The singer’s “Here We Go Again” tour would begin in 2018 and is still going today. Some Hollywood entertainers at Cher’s age would consider slowing down or even be retired by now, but she has other plans. Daily Mail reports that the tour has seen much of the prime touring spots already. It began in Australia and New Zealand at the end of 2018. A North American leg would follow at the beginning of 2019. Immediately following that was a European leg.

RELATED: Cher Performs “The Beat Goes On” During ‘Dancing With The Stars’ Finale

Now, Cher is back to dominating parts of the U.S. and is adding more dates to her tour! The tour is set to continue into spring 2020.

In conclusion, here are the spring dates below if you’re interested in catching the iconic Cher on tour!

Click for next Article
Previous article: Meet The Rockettes: Over 80 Years Of High Kicks, Long Hours, And Rigorous Auditions
Next Post: Aldi Has Released Cheese-Filled Ornaments For The Holiday Season