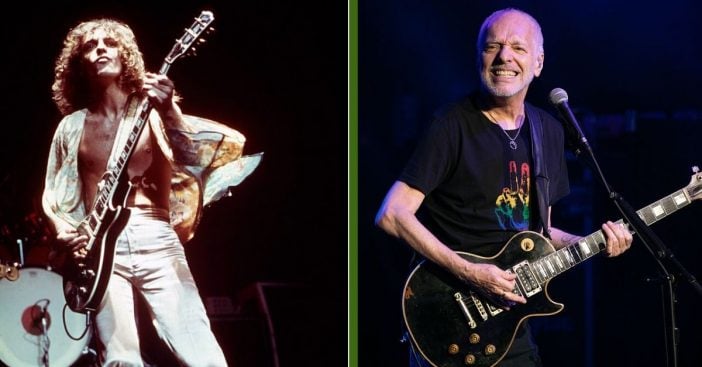 Rock icon Peter Frampton has been opening up about the reality of his battle with the muscle-wasting disease, Inclusion Body Myositis (IBM). He says that the disease came on very subtly and in ways that weren’t obvious to the naked eye. Frampton soon realized his legs couldn’t handle a hike as easily as they once could. “At first I thought, ‘I’m just getting old!'” he says.

He then realized that there must be an underlying issue after a series of falls onstage. Soon, the disease will rob him of his ability to play guitar, something that he is incredibly passionate about. He reveals to PEOPLE magazine that he sleeps with the same guitar that he used to write one of his greatest hits “Baby, I Love Your Way.”

Peter Frampton sleeps with his guitar, which he is extremely passionate about

Inclusion Body Myositis, according to Wikipedia, is a “progressive muscle disorder characterized by muscle inflammation, weakness, and atrophy (wasting).” It was because of this diagnosis that Frampton decided to have a farewell tour, since he will no longer be able to play his guitar one day. A dollar of every ticket sold for his farewell tour is going towards Frampton’s myositis research fund at Johns Hopkins.

It sounds like, despite this diagnosis, Frampton doesn’t plan to slow down and hopes that he doesn’t. “I hope I’m still writing lyrics and playing a new riff, if I can, when I’m on my last legs. Because that’s what my life’s all about.’”

He stays positive regardless of his diagnosis

As mentioned previously, a portion of the proceeds of these tickets for his farewell tour went to his myositis research fund at Johns Hopkins. He is currently receiving treatment at Johns Hopkins. Moreover, he is taking part in a clinical trial to test a drug that may hopefully stave off the effects of IBM. The disease affects just about 24,000 Americans.

Frampton is happy to report that despite battling the disease, IBM has not affected him in the throat (a very common aspect). 50% of sufferers of IBM experience this, and thankfully, Frampton can still speak and sing. He says that he remains in good spirits despite any of this. “My cup is always half full. I’m very positive about it,” he says.

We’re so happy to hear that regardless of this battle, he is remaining in good spirits!