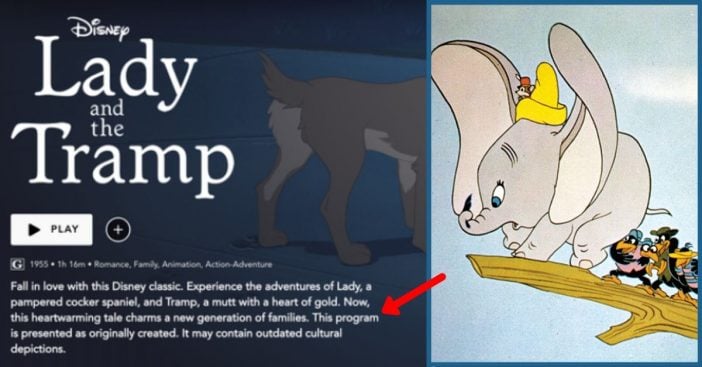 It looks like new streaming service Disney+ is already trying to save itself from outrage. They are putting disclaimers in their older films for potential racism or racist themes. Many of their older films such as Peter Pan, Dumbo, and Lady and the Tramp now have a disclaimer included that says they “may contain outdated cultural depictions.”

The streaming service notes that these movies receive criticism in the past for their ‘outdated cultural depictions.’ Furthermore, films like The Aristocats, Fantasia, and The Jungle Book even have this disclaimer. However, this little disclaimer is buried in the description area of its movies if people care to read them before watching.

Why do Disney+ films need a racism disclaimer?

The best example of this would be in the classic film Dumbo. There is a character by the name of Jim Crow who speaks in an accent that is a parody of a black American accent. The Aristocats and Lady and the Tramp also feature Siamese cats that speak in voices parodying East Asian accents. Additionally, all of the voices were performed by white actors.

RELATED: Disney Is Adding All Of Their Classic Old Films Like ‘Lady And The Tramp’ To Their New Streaming Service

Furthermore, in Peter Pan, many deem their depiction of Native Americans to be racist. A lot of people don’t understand why Disney+ needed to do this for such classic and beloved films, but others sounded off on Twitter on how much they love Disney+ for doing that.

One of the first things I noticed while looking around #DisneyPlus was "This program is presented as originally created. It may contain outdated cultural depictions." And I love that.

Another person says, “Look at #DisneyPlus letting the people know early that their old films were racist and culturally insensitive. Accountability is key, and historical context is important.” However, another person chimes in not exactly thrilled with Disney+ (seen in the tweet below).

There are certain Disney films that did not make it onto the streaming service, perhaps for being too culturally insensitive. Song of the South is one of them. However, in another classic, some scenes have been edited out. In Fantasia, there is a dark-skinned centaur by the name of Sunflower. She takes care of the lighter-skinned centaurs and this scene has been edited out.

Warner Bros has been doing the same thing with their home video cartoon releases. Their disclaimer is way better than Disney’s. pic.twitter.com/APyzyih06n

RELATED: Disneyland’s First-Ever Customer Has Been Using His Lifetime Ticket Since 1955

Click for next Article
Previous article: Dolly Parton Sings Faith-Based Songs At The 2019 CMA Awards
Next Post: Marie Osmond Chipped Off A Piece Of Her Kneecap During Fall