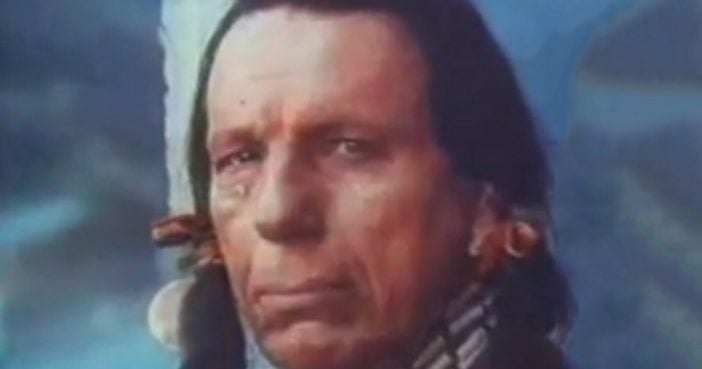 We all remember the famous “Crying Indian” who best known for his PSA, “Keep America Beautiful” but, wait until you hear the truth behind this actor.

Earth Day, the annual day of environmental action and awareness, was first held on April 22, 1970. This past April 22nd, we finally ventured into the woods behind our house and pulled 4 putrid truck tires/mosquito farms out of the mud, along with about 200 pounds of scrap metal, engine parts, and farm equipment. The place used to be a dairy farm, and I guess “out of sight” was “out of mind”. If it were still the 70’s, cleaning up the woods would have been “outta sight” in a whole different way.

Here’s a clip of The Crying Indian from the early 70’s.

In 1996, Cody’s half-sister said that he was of Italian ancestry, but he denied it.

OK, so Chief Iron Eyes Cody wasn’t a real Native American after all. But that didn’t stop the ad campaign from having a tremendous effect back then. And it’s no less relevant today.

Previous article: Ever Wondered Why Paper Cuts Hurt So Much? Here’s The Science Behind These Painful Little Cuts
Next Post: Spam Recall: More Than 220,000 Pounds Of Canned Meat Have Been Recalled Over Oral Injuries