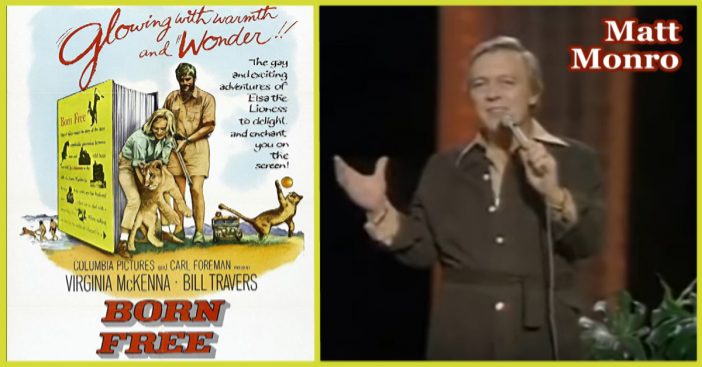 Born Free is the biography of Elsa the lioness. This book was written by Joy Adamson (1910-80), the wife of George Adamson (1906-89), who worked as a game warden in Kenya and who later became one of the founders of the modern wildlife conservation movement. The couple met and married while she was on safari; George was Joy’s third husband.

In 1956, George Adamson shot and killed a lioness as it attacked him; it was only afterwards that he realized the cat was protecting her cubs. Adamson took them home with him; two were later sent to a zoo, but the third, Elsa, was raised by the couple as a domestic pet. She was eventually released into the wild, but returned to her mistress with three cubs in tow.

Joy published Elsa’s story in 1960, and the semi-documentary type film featuring Virginia McKenna and Bill Travers was released in 1966. Both the Adamsons suffered violent deaths: Joy was murdered by a former employee, and George was shot dead by poachers.

The song’s composers John Barry and Don Black asked British singer Matt Monro to record the tune for the movie. Roger Williams, Frank Sinatra and Andy Williams all recorded covers of the song. Roger Williams’ version was especially noted for its use of a male chorus, which is heard in the second half of the song.

Stay free, where no walls divide you
You’re free as the roaring tide
So there’s no need to hide

(Stay free, where no walls divide you)
You’re free as the roaring tide
So there’s no need to hide