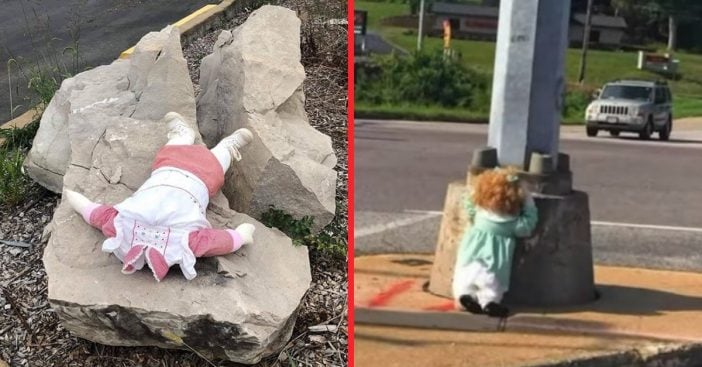 With Halloween still months away, there is something creepy happening in several cities in Missouri. Creepy dolls are showing up in strange places, with some of them being headless. People are stopping to help, thinking they are children, and realizing that they are just some really scary-looking dolls. How creepy would that be?

The dolls have been seen in Festus and Crystal City. Both are cities in Missouri. Residents report seeing these dolls near poles, on the ground, and hanging from a light pole. After some people mistook the dolls for children, the police were involved after a report was filed.

Photos of the creepy dolls popping up

The police still don’t know who is putting these dolls out, but they say it is a dangerous prank. They say that someone could stop and try to save a child, thinking the doll is a child and get hit by a car. Police are still investigating the situation, but believe it is probably just a prank. Hopefully, they find the person doing this soon!

Often, people report seeing the dolls and then they disappear just as quickly.

In 2016, a similar creepy phenomenon happened across the country. Many people in different states reported seeing creepy adult clowns by the side of the road. Police arrested several of these clowns and masks and face paint was banned at some schools. Do you remember when this happened? I actually saw one near my house and it was quite unsettling, to say the least!

What do you think of these creepy doll sightings? Kind of scary, right? Especially when it isn’t even that close to Halloween!

In conclusion, learn more about the news story below:

Learn more about the creepiest clown motel ever!

Click for next Article
Previous article: ‘NCIS’ Actor Mark Harmon’s Worth $90 Million At One Time He Was Named The Fifth highest-paid actor on Television
Next Post: Michael Douglas’ Kids, Dylan & Carys, Look All Grown Up In Family Photo With Kirk Douglas