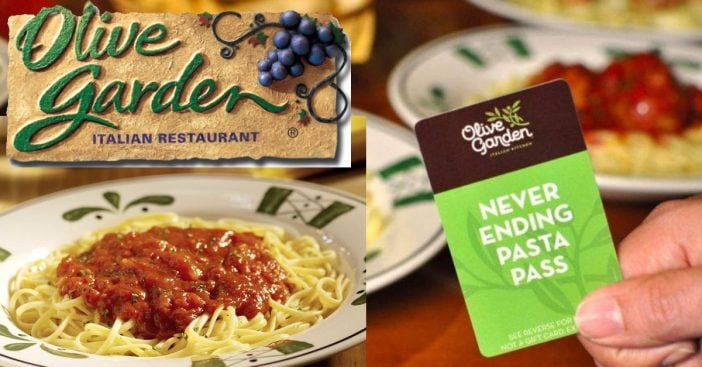 We previously reported that Olive Garden will be selling their pasta passes. Now, 50 lucky customers can get a lifetime pasta pass for an extra $400, so it would be $500 total. The passes go on sale on www.PastaPass.com on August 15, 2019, at 2 p.m. ET. 24,000 regular pasta passes will be sold and they are likely going to go quick.

Olive Garden said that the lifetime pasta pass will pay off by the 45th meal. According to Yahoo, Olive Garden said, “The Lifetime Pasta Pass includes a lifetime of unlimited servings of guests’ favorite pastas, homemade sauces, and toppings, accompanied by unlimited soup or salad and breadsticks.”

The chain restaurant has also announced that they are adding a new sauce to the never-ending pasta promotion. It will be creamy roasted garlic sauce. Would you want to try it?

Olive Garden is bringing back a fan favorite deal and it goes on sale soon. Get excited! Starting on August 15th, the Italian chain restaurant will be selling never-ending pasta passes. These passes generally cost $100 and let you eat unlimited pasta at Olive Garden for eight weeks.

However, Olive Garden is teasing that there will be a twist to this deal. The restaurant is posting clues on social media and their website that hint to a change with the deal.

In addition, on Olive Garden’s website, they posted this riddle in association with the pasta pass. The riddle includes links that go to their social media pages. It reads:

You’ve got a big cravingListen, you’ll surely submitYou know what you need nowIt’s a pasta bowl that just won’t quit

Text your friendsFor they know the placeSoup, salad, breadsticks andEvery dish you want to taste

Oh, but what’s this?There’s something newA mystery awaitsIt’s a clue, what to-do?

Deeper and deeperMuch further you’ll fallFinding clues to the secretExpect to have fun, above all

The answers are thereFor the questions you seekAnd it’s ok to ask others for helpWe’re all family here, so to speak

Can you figure out what the new twist will be for the pasta pass? On Thursday, August 15th at 2:00 pm EST, 24,000 passes will go on sale. Last year, they all sold out in under a minute! So, you may want to sign on to Olive Garden’s website and snag yours quickly.

Last year, they also sold an annual pasta pass for $300. Fingers crossed they will be offering both deals this year! Will you get a pasta pass from Olive Garden? If you eat there a lot, it could be a great deal.

Previous article: Grandson Is Taking 89-Year-Old Grandma To Every National Park In The U.S.
Next Post: Rob Lowe Is Selling His Massive Mansion For $42.5 Million — See The Stunning Photos