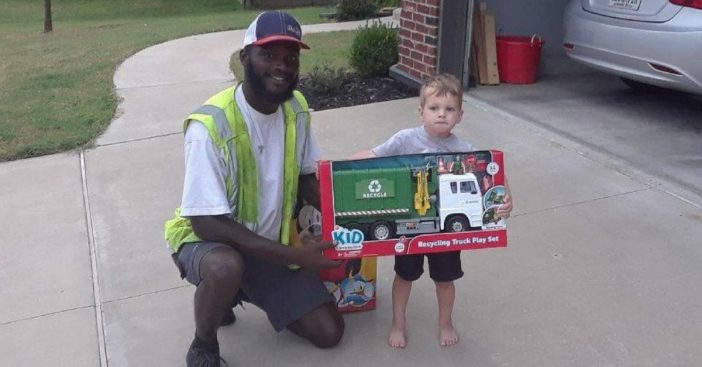 Aaron Mitchell, a sanitation worker in Oklahoma City, has formed an unlikely bond with a young boy and it’s making rounds on the Internet! As Aaron goes about his normal work route, he regularly sees the same young boy each time who greets him. The boy typically waits outside to greet the employees of American Waste Control as they do their job in the neighborhood.

Aaron says that the boy would always wait outside “whether it was 30 degrees or 100 degrees.”

The story is on Facebook by the City of Jenks. “As a result, the crew on the back of the truck became friends with him and his family,” the Facebook post says. Then, they get into how the gift of the toy truck came about. “Yesterday, Mr. Mitchell delivered a brand new toy recycle truck to our young Jenks resident. It was given to him in a Mickey Mouse gift bag with tissue paper and a smile. This was done by Mr. Mitchell’s own generosity.”

“Thank you Mr. Mitchell, and the whole crew from American Waste Control, for making this little boy’s day and keeping our community clean!” the Facebook post ends.

Take a look at the video above for another feel-good story. One young boy gives cookies to his favorite garbagemen!

For more feel-good stories, check out this story where a son pays off his parents’ mortgage as a Christmas gift. They have the sweetest reaction!

Click for next Article
Previous article: Eleven Photos Of The Beautiful Olivia Newton-John Throughout The Years
Next Post: Couple Celebrates Overcoming Meth Addiction With Inspiring Before And After Photos